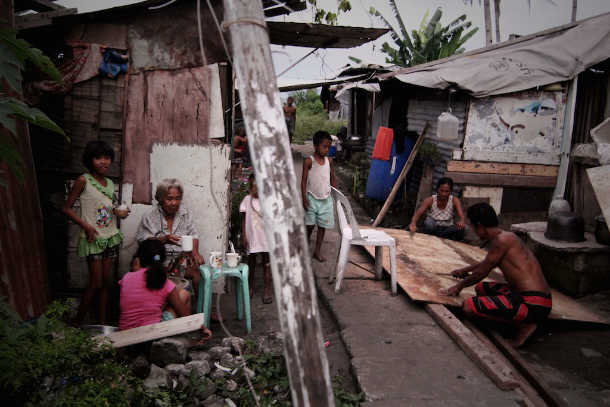 Some survivors of Typhoon Haiyan, known as Super Typhoon Yolanda in the Philippines, continue to live in disaster-prone areas five years after the tropical cyclone battered parts of the country in 2013. (Photo by Vincent Go/ucanews.com)

Every Nov. 8, Imelda Tacalan feels like she is still being hit by Super Typhoon Haiyan, one of the strongest tropical cyclones to ever hit the Philippines back in 2013.

The 48-year-old mother of seven remains "devastated" five years after the disaster. Her family still lives by the sea in the village of Balangiga in Eastern Samar province.

"We thought we would be transferred to a safer place, but it's not happening," she said. "We are back at the same place by the sea."

Of the 460 housing units promised by the government to Haiyan survivors in her town, only 230 have been constructed, and they are "poorly built," said Imelda.

There are survivors, however, who were able to relocate to safer places, like Pope Francis Village, a permanent relocation site in the city of Tacloban.

In the village named after the pontiff, who visited the devastated province in 2015, at least 566 housing units are either being or have already been built by church groups for typhoon survivors.

A consortium of local and foreign organizations including Caritas, the Canadian Catholic Organization for Development and Peace, and the Urban Poor Associates, among others, set up the village.

"The church is the church of the poor, thus, we make sure we treat everyone with dignity, especially the poor," said Jing Rey Henderson, spokesman of Caritas Philippines.

She said the church groups made sure to provide the "best humanitarian interventions" possible.

"We make sure [the people] have a strong sense of ownership of the project, in building their own homes," Henderson said, adding the project is not a "dole out or a one-time event."

Those who have been able to obtain a property in the village are encouraged to involve themselves in key decision-making processes so they have a stake in building up the community.

Henderson said it is not only shelter the church wants to provide, but also jobs and other capacity-building initiatives.

"This is how we define sustainable development. It is the church's brand of humanitarian and development programming," she told ucanews.com.

Yolanda Sembrero, one of the recipients of a house in the village, said she did not expect her new home would be that "big and durable."

"I only dreamt of receiving a makeshift house after our small home was destroyed by Haiyan," said the 43-year old mother of four from the coastal village of San Jose.

"I will take care of our house because this is a gift from the church, from God," she said.

A house in Pope Francis Village has an average floor area of 40 square meters and costs about US$5,700.

The village has become a "model" for other relocation sites for typhoon victims in the country, said Joli Torella of the Urban Poor Associates.

"One good thing about the village is it's not far from the source of livelihood of its residents," he said.

Other disaster victims have not been as lucky as those in the church-built village.

A group of survivors who banded together to form the Community of Yolanda Survivors and Partners complained that the government's reconstruction efforts have been "slow, non-consultative, inefficient, with many reported cases of anomalies."

In Tacloban city about 3,000 families were brought to a relocation site where there is still no water, electricity or schools.

However, Vincent Basiano of Anibong district in Tacloban said he has to return to his hut in the coastal village because "life at the relocation site is more difficult."

The government reported that as of December last year about $2.8 billion was released to implement the rehabilitation of areas devastated by Haiyan.