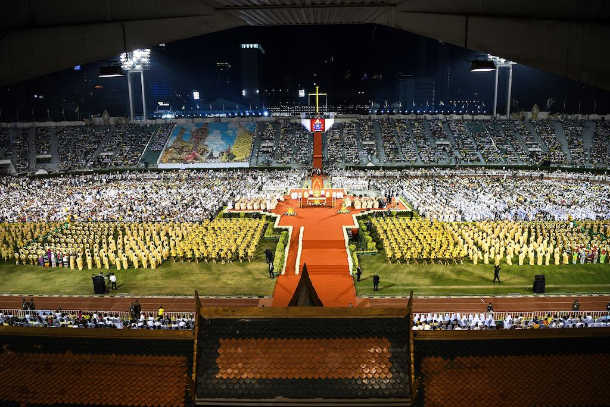 Pope Francis used his first public Mass in Thailand to call for compassion and help for migrants, beggars, exploited fishermen and victims of sex trafficking and drug addiction.

Delivering a homily in his native Spanish, the 82-year-old pontiff also encouraged Thai Catholics to be the missionary disciples of Jesus and follow in the footsteps of the first missionaries to their land.

About 30,000 faithful participated in the Holy Mass at Bangkok’s National Stadium on Nov. 21, though many more watched it on big screens outside the stadium.

“I think of children and women who are victims of prostitution and human trafficking, humiliated in their essential human dignity. I think of young people enslaved by drug addiction and a lack of meaning that makes them depressed and destroys their dreams,” the pope told his audience.

“I think of migrants, deprived of their homes and families, and so many others who like them can feel orphaned, abandoned, without the strength, light and consolation born of friendship with Jesus Christ, without a community of faith to support them, without meaning and a goal in life. I think also of exploited fishermen and bypassed beggars.

All of them are part of our family. They are our mothers, our brothers and sisters. Let us not deprive our communities of seeing their faces, their wounds, their smiles and their lives.”

Pope Francis is in Thailand to celebrate the 350th anniversary of the establishment of the Apostolic Vicariate of Siam in 1669. The motto chosen for the papal visit is, “Christ’s Disciples, Missionary Disciples.”

He urged Thailand’s Catholics to follow the “footsteps of the first missionaries in order to encounter, discover and recognize with joy the faces of all those mothers and fathers, brothers and sisters, whom the Lord wants to give us and who are absent from our Sunday table.”

Thailand is a Buddhist-majority nation where only about 390,000 people among its population of 70 million are Catholic.

The pope said that “evangelization is not about gaining more members or about appearing powerful” but about sharing “God’s merciful and healing embrace” which in turn “makes us one family.”

He recalled the missionaries who first spread God's word in Thailand centuries ago.

“By hearing the Lord’s word and responding to its demands, they came to realize that they were part of a family much larger than any based on blood lines, cultures, regions or ethnic groups,” he said.

“Without that encounter, Christianity would have lacked your face. It would have lacked the songs and dances that portray the Thai smile, so typical of your lands. The missionaries came to understand more fully the Father’s loving plan, which is not limited to a select few or a specific culture but is greater than all our human calculations and predictions.

"A missionary disciple is not a mercenary of the faith or a producer of proselytes, but rather a humble mendicant who feels the absence of brothers, sisters and mothers with whom to share the irrevocable gift of reconciliation that Jesus grants to all.”

The Hail Mary used in the Mass was recited in five languages: Thai, English, Italian, French and Vietnamese.

Click here to see more pictures from the Holy Mass