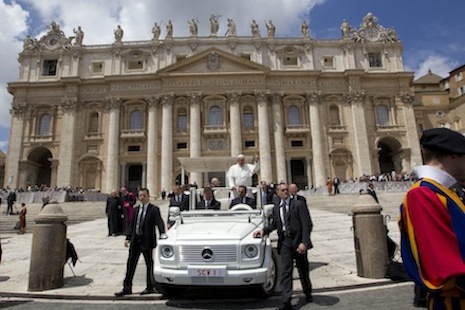 Pope Francis is forgoing the bulletproof popemobile for his upcoming trip to Brazil for the Catholic Church's youth festival, further evidence that he has no qualms about tweaking the Vatican's security operations for the sake of getting closer to the faithful.

The Vatican said Wednesday that Francis will use the same open-topped car he uses for zooming around St. Peter's Square to move about Rio de Janeiro, where he arrives July 22 for the week-long World Youth Day fest. He'll use a closed car for longer-distance drives, but the open-topped car for milling about the crowds.

In recent times, popes have always used the protected popemobile, with its raised seat and panoramic, bulletproof windows, for forays outside Rome. Francis, however, ended that tradition when he used an open-topped Fiat during his recent visit to the Italian island of Lampedusa.

Francis has made a point of changing Vatican protocol, especially where it concerns the trappings of the papacy and his ability to connect with ordinary people. He eschewed Vatican security on his first outing as pope when he visited a Roman basilica the day after his election, and he has chosen to live in the Vatican hotel rather than the fancy, enclosed Apostolic Palace, to be with more regular folk.

The Vatican spokesman the Rev. Federico Lombardi announced the change Wednesday during a briefing about the pope's July 22-28 trip, saying it was "clearly" Francis' personal decision to leave the popemobile behind.

"It's in continuity with what he does here," Lombardi said. "He feels good about being in close communication with the environs around him, and this car lets him get on and off."

Lombardi said he didn't know if Brazilian security had had to change course as a result of Francis' decision. The pope's personal security detail will do as they do while he is in St. Peter's, walking alongside the car, he said.

Francis has a busy schedule in Brazil, including a one-day trip to the popular Marian shrine in Aparecida, between Rio and Sao Paolo, a visit with patients at a hospital for the poor and another with juvenile offenders. A highlight will be a walk-through of one of Rio's slums, or favelas, where Francis is expected to stop inside one home and chat with a family, Lombardi said.

He said the Vatican was well aware of the violent protests that swept across Brazil last month, but said he was confident that the protesters didn't have a problem with the pope or the Catholic Church and that the Holy See expects Brazilian authorities will handle the situation well.

"We are going with much serenity," Lombardi said. He added that "The message of the pope is one of solidarity with society and to encourage adequate development for all."

The nationwide protests first targeted transportation fare increases but quickly expanded to a variety of causes including government corruption, high taxes, poor public services and the billions of dollars being spent for next year's World Cup soccer tournament and the 2016 Olympics in Rio.