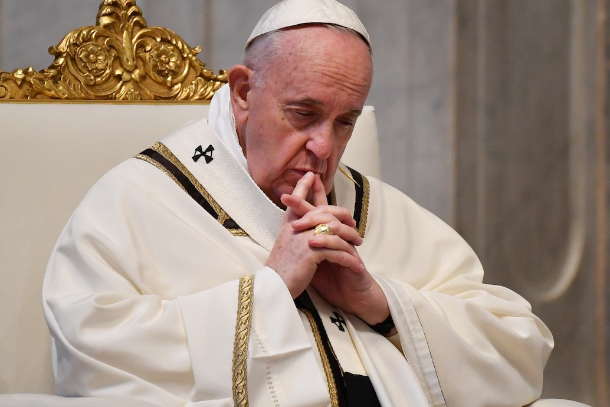 Pope Francis gathers his thoughts during Easter Sunday Mass behind closed doors at St. Peter's Basilica in the Vatican during the lockdown aimed at curbing the spread of the coronavirus. (Photo: Andreas Solario/AFP)

Share this article :
Pope Francis’ live broadcasts of daily Masses that millions followed online will end on May 18 when public worship resumes in Italy after two months of suspension. Pope Francis’ last livestreamed Mass on May 18 will be special as the day marks the 100th birth anniversary of Pope St. John Paul II. The Mass will be at the altar over the tomb of St. John Paul II, who was elected pope in 1978. Born in Poland in 1920, St. John Paul II was the first non-Italian pope since the 16th century when Pope Adrian VI became the only Dutch pope. The Diocese of Rome suspended public Masses on March 8 due to the coronavirus outbreak in Italy.
Related News Pope Francis: Young must 'go up to the mountain' Several dioceses in worst-hit northern Italy, including Milan and Venice, had suspended public liturgies in the last week of February. Public Masses in Italy will resume under conditions approved by the Italian bishops’ conference and the government. The bishops’ conference on May 7 issued a protocol saying Masses and other liturgical celebrations must limit the number of people present and should follow social distancing norms. Massgoers must wear face masks, while churches must be disinfected between celebrations. Priests and other ministers of Holy Communion should wear gloves and masks to avoid contact with communicants’ hands. The protocol, issued by bishops’ conference president Cardinal Gualtiero Bassetti, stated that the sign of peace should be omitted and holy water fonts must be kept empty. The protocol was issued after the government and bishops’ conference signed an agreement. A standoff between the government and church officials escalated late last month when the government announced a gradual easing of the lockdown but did allow the resumption of Masses. The government has also given permission for the resumption of public religious programs such as baptisms, funerals and weddings.