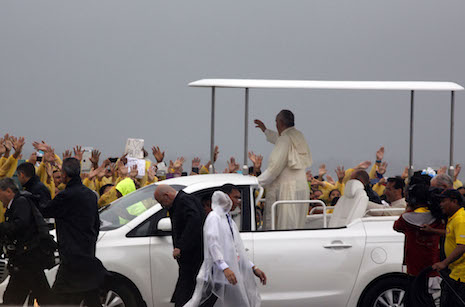 The recent visit by His Holiness Pope Francis to the Philippines served as an inspiration and a re-awakening of faith.

Countless testimonials bring to light how he invigorated and touched the lives of millions of Filipinos who braved heavy rains and tuned in for his homilies and speeches.

Central to the pope’s message was caring for the poor. The highlight was his trip to Tacloban in Leyte province, underscoring his desire to be in solidarity with victims of Typhoon Haiyan (known locally as Yolanda) who continue to experience social injustice.

They have become victims of climate change and have suffered mental anguish from losing loved ones and their homes, not to mention being traumatized by such a climate catastrophe that is now considered a ‘new normal’.

Aboard the papal plane en route to the Philippines, the pope declared that “human activity is the main cause of climate change”, and that “man has slapped nature in the face”.

The pope’s words are a powerful indictment of how we risk destroying what many describe as God’s creation.

In his homily in Luneta, and in an undelivered speech at a youth forum at the University of Santo Tomas, Pope Francis tackled head on the importance of protecting the environment.

He emphasized how countries like the Philippines will be “seriously affected by climate change”, disproportionally affecting the poor and marginalized.

The pope’s call to action on climate is not only groundbreaking, but also prompts us to think and act with urgency — to do something about our climate situation while we still can.

Climate change has become a social and moral problem that affects everyone, especially the poor. That is one crucial reason why the pope is calling on a “moral imperative” to ensure social and climate justice for present and future generations.

It is admirable that the pontiff — known to be a champion of the poor — is taking on another global injustice and is going above and beyond the secular realm to convince and persuade the world’s 1.2 billion Catholics, religious leaders — even political leaders — to act “courageously” and urgently on climate change.

Pope Francis’ unique role as a religious leader who is also vocal about the environment comes at a crucial time when countries will make an attempt at concluding 20 years of fraught negotiations with a commitment to reduce heat-trapping emissions.

The pontiff hopes that the forthcoming encyclical on climate change could influence UN climate talks taking place in Paris later this year.

The pope commended Filipinos for their strength, faith and resilience in the face of natural disasters. He is right to say that we are courageous and resourceful survivors, not mere victims.

However, let us not lose sight of who the perpetrators are: the big polluters — the fossil fuel industry — that have profited from pumping carbon dioxide emissions into the atmosphere and contributed to social exclusion. They must be held accountable for the climate crisis that besets countries like the Philippines.

Thus far, the morally bankrupt fossil fuel industry remains invincible, hiding behind the cloak of their vast wealth and power.

They have bankrolled governments and injected fear into the political arena, thereby constraining it from embracing truly sustainable development.

In order for us to create an enabling environment for change, we must break away from the tight grip of the fossil fuel industry.

More than a moral question, it is an ethical imperative for world leaders to now make climate justice a reality, to hold the big polluters accountable and set us on a low-carbon pathway so that our children may have a sustainable future.