Pope Francis sends greetings as he flies over China

'Divine blessings of peace and wellbeing' offered to president and citizens 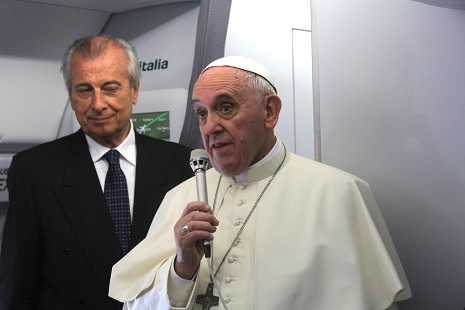 Pope Francis, flanked by security, speaks to reporters on his chartered Alitalia flight to South Korea. (Photo by Steve Finch)

By Steve Finch on the papal plane and ucanews.com reporters in Hong Kong

Pope Francis sent a rare public greeting to President Xi Jinping during the first ever papal flight across China en route to his landmark visit to South Korea.

Amid the most severe Chinese crackdown on Christianity in years, the government permitted the pope’s passage over Inner Mongolia and past Beijing at daybreak before skirting North Korea and landing in Seoul.

“Upon entering Chinese air space, I extend best wishes to your excellency and your fellow citizens, and I invoke the divine blessings of peace and well-being upon the nation,” the pope said in a message radioed to Xi – a Vatican custom during a papal over-flight.

Of the 10 countries the pope’s plane crossed en route to Seoul, only messages to nominally Communist China and Mongolia failed to mention “God”.

China has kept the pope at arms length as Francis begins the first papal visit to Asia in nearly 15 years.

Rumors of a possible visit to Beijing as part of the current trip led nowhere. Chinese authorities have reportedly issued a countrywide ban on Catholic pilgrimages to South Korea during the pope’s five-day visit, although some Chinese Catholics are understood to have made it to Seoul for the Asian Youth Day celebrations.

Relations between the Vatican and Beijing remain strained as both sides continue to disagree over ordinations.

Chinese authorities have detained apostolic administrator Father Peng Weizhao in a hostel in southeastern Jiangxi province since May.

Meanwhile, the Vatican is yet to approve Beijing’s elected choice to become the new bishop of Chengdu, Father Tang Yuange, in the latest tit-for-tat over who decides promotions in the Chinese Church.

Despite recent difficulties, the Vatican has publicly remained upbeat about relations with China.

Representatives from both sides reportedly met in June, and the Pope earlier this year played up written correspondences between himself and Xi during an interview with the Italian press.

“There are relations,” he said. “The Chinese are a great people whom I care about.”

Cardinal Pietro Parolin recently told the Italian Catholic magazine Famiglia Cristiana that the Vatican hopes for “a respectful and constructive dialogue” in a bid to improve shrinking religious freedoms in China.

Authorities have destroyed or ordered the removal of crosses at 231 churches this year in Zhejiang, a wealthy southeastern province with a large Christian population.

Although persecution continues against Christians elsewhere in China – particularly those who worship without state approval – Zhejiang continues to bear the brunt, prompting confusion over the central government’s role in the crackdown and whether Beijing plans to extend attacks on Christians countrywide.

Fenggang Yang, director of the Center on Religion and Chinese Society at Purdue University in the US, says the Chinese president’s personal feelings on Christianity remain unclear as hardline party ideologues have exaggerated the threat posed to the state.

“[This] will make it difficult for Xi Jinping to extend his hands to receive the reached-out hands of Pope Francis, even if Xi himself is willing to do that,” he said.