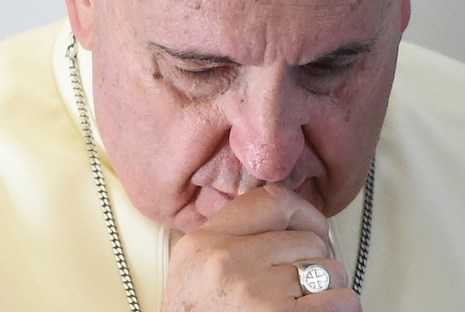 Pope Francis takes a moment during his flight to Korea to pray for slain Italian journalist Simone Camilli and his Palestinian translator Ali Shehda Abu Afash, both killed on Wednesday in Gaza. (AFP photo/Daniel Dal Zennaro)

Aboard the papal flight to South Korea today, Pope Francis led an impromptu moment of silence to pray for a photojournalist who was killed in Gaza, and thanked journalists for their work.

Simone Camilli, a 35-year-old Italian working for the Associated Press, and his freelance Palestinian translator, Ali Shehda Abu Afash, died on Wednesday along with four Gazan bomb disposal offficers who were trying to dismantle an Israeli missile.

The missile exploded in Beit Lahiya as they tried to neutralize it. Four additional persons, including AP photographer Hatem Moussa, were gravely injured by the explosion.

Fighting between Israel and Hamas since July 8 has killed more than 1,900 Palestinians, and 67 Israelis.

“These are the consequences of war,” Pope Francis told reporters after learning of the death of Camilli, Afash, and the others.  “Thanks for your service,” the pope told the journalists on his flight. “Thanks for all that you do.”

Pope Francis asked for a moment of silence to pray for those who died in Beit Lahiya; the moment lasted about 30 seconds.

The Pope then turned to the topic of his visit to South Korea.  “It will not be a tourist trip. It will be extremely physical,” he told the journalists, again expressing his gratitude.

“Thank you so much, as your words always help to unite us to the world,” Pope Francis said. “Also I encourage you, give this message of peace always.”

The pope also announced that he would give an interview to journalists on his return flight from South Korea to Italy. In a light-hearted spirit, he compared the promised interview to the story of the biblical prophet Daniel.

“Daniel will go into the lion's den,” he said. “They don't bite though,” he said in reference to the journalists.