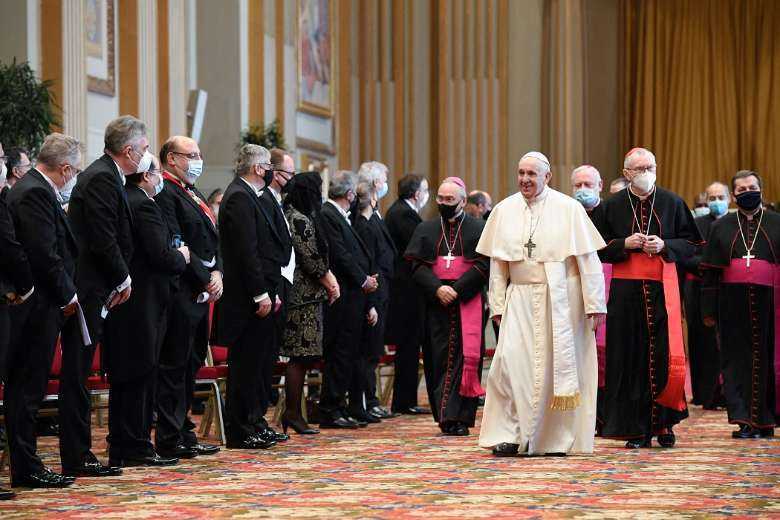 Pope Francis attends a ceremony to give New Year greetings to ambassadors to the Holy See at the Vatican on Feb. 8. (Photo: Vatican Media/AFP)

The world’s journey through the horror caused by the novel coronavirus began with the discovery of the first cases in Wuhan, China, in December 2019.

In less than six weeks, it had infected thousands in at least 25 countries, leaving world leaders grappling with what to do next.

So far the virus has infected more than 107 million people globally and killed over 2.3 million.

The horror story in Indonesia, the world’s fourth most populous nation, began with the revelation of its first two confirmed cases on March 3.

Unfortunately, Indonesian officials were telling people in the beginning not to worry themselves too much as the outbreak would be dealt with.

Now Indonesia is in the world’s top 20 when it comes to the worst-hit nations, recording nearly 1.2 million infections and 32,000 deaths. It has the highest death toll in Southeast Asia and fourth highest in Asia after India, Turkey and Iran.

The Covid-19 pandemic has changed the world in many ways and forced misery onto untold millions.

The World Bank estimates an additional 88-115 million people have been driven into extreme poverty, with the largest share of the new poor in South Asia followed by Sub-Saharan Africa.

It said in December that many of the new poor are likely to be engaged in the informal service, construction and manufacturing sectors where economic activity has been most affected by anti-virus restrictions.

An earlier joint statement from world bodies including the World Health Organization (WHO), International Labor Organization and the UN’s Food and Agriculture Organization, said that besides a dramatic loss of human life, the pandemic also presents an unprecedented challenge to global public health, food systems and the workforce.

They predicted that about 800 million people would be undernourished by the end of 2020. Nearly half of the world’s 3.3 billion workforce were at risk of losing their livelihoods, with informal workers such as agricultural workers suffering the most because of a lack of social protection and access to quality health care. Covid-19’s massive impact requires global solidarity and support, particularly for society’s most vulnerable.

In his encyclical Fratelli Tutti issued last October, Pope Francis emphasizes global fraternity, which is probably a vague notion in an increasing neoliberalist society but which is the “rule of the game” for the Church.

In this document, the pontiff laid out his post-pandemic vision. Its imperatives go beyond societal boundaries and call on nations to cooperate for the common good.

The calls are much more compelling now as nations scramble to acquire vaccines. It has seen rich countries become increasingly selfish, securing millions of vaccines for themselves while poor nations have been left to wait their turn.

For Pope Francis and the entire Church, the Covid-19 pandemic is a call for a transformation of political and economic institutions to meet the needs of the most affected people.

Transformation is needed to face future pandemics which the WHO has warned could be worse than the coronavirus.

In a meeting with diplomats to the Holy See on Feb. 8, Pope Francis explained the problems that the world is facing after Covid-19 that will need global solutions.

While confirming his plan to visit Iraq in March, the pope reminded world leaders of the health, economic, social, environmental and political crises generated by the global pandemic.

Pope Francis said these current crises provide a helpful opportunity for the world and the need for a “new Copernican revolution” that can put the economy at the service of men and women, an economy that brings life not death, inclusive and not exclusive, humane and not dehumanizing, one that cares for the environment and does not despoil it.

The pope said it is painful to note a growing number of legal systems in the world moving away from their inalienable duty to protect human life at every one of its phases.

Hence it is indispensable that political and government leaders work above all to ensure universal access to basic health care to meet people’s actual needs without concern for profit.

Speaking about vaccines, the pope encouraged all nations to actively contribute to international efforts to ensure an equitable distribution of them, based not on purely economic criteria but on the needs of all, especially those in most need.

The pope also pointed to the earth’s fragility and called for international cooperation in caring for the environment, which he had discussed in his encyclical Laudato Si’. He expressed hope that the next UN Climate Change Conference in Glasgow this November will see world leaders come to an effective agreement to address the consequences of climate change.

The pope called on governments and politicians around the world to adopt policies that can be seen as a valuable form of charity work. For him, the true political goal is serving the common good and recognizing the importance of the dignity of the human person.

The task of politicians is to find solutions to anything that denies people their rights, such as social rejection, human trafficking, lack of nourishment, sexual exploitation, slavery, terrorism and other such crimes.

Politics must be centered on human dignity, not dictated by greed or the will of the privileged few.