Pope's message of peace, dialogue and fraternity will force Iraqi politicians to rise above sectarian squabbles 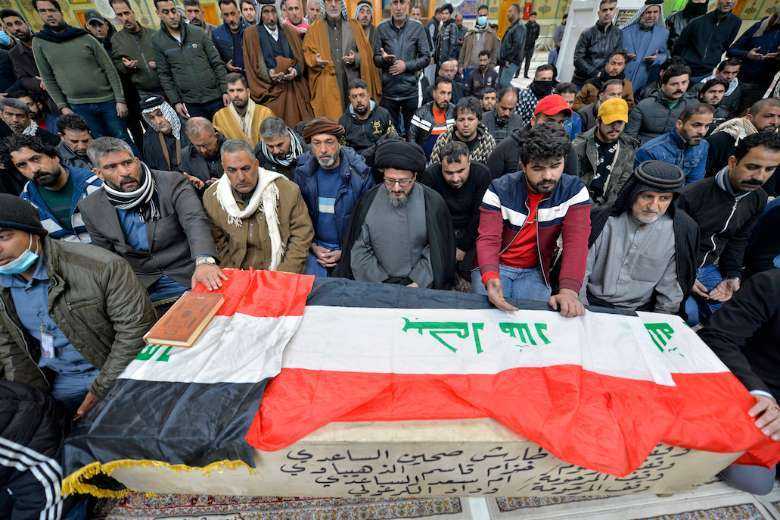 Iraqi mourners pray over the coffin of a victim of a twin suicide bombing during a funeral in the holy city of Najaf on Jan. 21. The bombing killed 32 people and wounded 110 at a crowded market in central Baghdad in the city's deadliest attack in three years. (Photo: AFP)

When Pope Francis visits Iraq in March, he plans to anchor his interfaith dialogue with Muslims in Abrahamism, the common root of Semitic religions that trace their origin to Judaism and the worship of Abraham's God.

The Biblical birthplace of Abraham, Ur in southern Iraq, will figure prominently in the pope's itinerary when he visits war-torn Iraq.

The impact of his visit will reflect on the entire strife-ridden West Asia region, where the two major Abrahamic religions — Judaism and Islam — are confronting each other and treat the ancient Christian communities as second-class citizens.

The pontiff is extending the olive branch through Abraham and the Old Testament, which the antagonistic warring groups and proponents of intra-Muslim rivalry will find difficult to renounce.

The pope is expected to produce something similar to the 2019 Abu Dhabi document on human fraternity while engaging Shia Muslim leaders in Iraq from March 5-8.

Shias are one of the two main branches of Islam and form some 65 percent of Iraq's 39 million people. The Sunni sect, estimated to be 90 percent of the world's 1.5 billion Muslims, is a minority in Iraq, accounting for 34 percent of its population.

The Vatican has to deliver a Christian-Shia dialogue to match the Christian-Sunni ties cemented during the papal visit to the United Arab Emirates in 2019, suggested Cardinal Louis Raphael Sako, head of the Chaldean Catholic Church.

The Vatican wants a pan-West Asia reach for the papal visit and has modeled the Iraqi visit motto: "You are all brothers." The motto is written in the Arabic, Chaldean and Kurdish languages.

For the uprooted ancient Christian communities and their torched churches in Iraq, the papal journey will bring forth a social change in political Islam, which sees religion as a driving force to bring in social and political changes in society.

The dwindling Christian population, who claim an apostolic origin, are pinning their hopes on the pontiff as he has dedicated a quarter of all his papal visits to Muslim-majority nations without taking sides in the intra-Muslim feud.

Iraqi Christians, who still use Aramaic, the language Jesus spoke, are desperately seeking an end to their plight, aggravated by the establishment of the Islamic State in Iraq.

Pope Francis is expected to visit Christian communities in the Nineveh Plains, which saw a record number of Christians fleeing due to atrocities by the Islamic State from 2014-16.

During his public statements, the pope has expressed his concern for these persecuted Christians.

His stopover in Qaraqosh in northern Iraq will serve as a shot in the arm for a devastated Christian community that is rebuilding churches and residential houses.

After the Islamic State ordeal ended, Christians have struggled to benefit from the rehabilitation initiated by the Iraqi government.

By his Iraqi visit, the pope is trying to accomplish what his predecessors were unable to do because of complex and pressing issues in Iraq. Pope John Paul II tried to visit Iraq in 1999 but his efforts did not materialize.

Christians in Iraq belong to the Chaldean Church, which is in communion with Rome and headed by Cardinal Sako.

The Syriac Catholic Church is also active, with a modest number of Latin, Maronite, Greek, Coptic and Armenian churches. There are also non-Catholic churches like the Assyrian Church.

Other minority groups like the Yazidis and Baha'is are expected to get attention to their plight due to the episcopal visit.

The pope's message of peace, dialogue, fraternity and constructive cooperation will force Iraqi politicians to rise above their sectarian squabbles and bury the hatchet to usher in a better future for Iraqi youth.

Iraqi President Barham Salih said on Twitter that the trip "will be a message of peace to Iraqis of all religions and serve to affirm our common values of justice and dignity."

Pope Francis has expressed doubt about his trip because of the coronavirus pandemic. In an interview recently, the pope said he had put off two international trips in 2020 "because in conscience I cannot cause gatherings, can I? Now I don't know if the next trip to Iraq will take place."

But local organizers are undeterred and have released the logo and motto for his visit. The logo depicts Pope Francis with the Tigris and Euphrates rivers, a palm tree and a dove carrying an olive branch over the Vatican and Iraqi flags.

On a personal level, the 84-year-old pope has equipped himself for the journey by vaccinating against Covid-19 to chart out the second leg of his interfaith dialogue after Abu Dhabi's success.

For this, he has selected the great Mesopotamia region, which once housed the Garden of Eden, Abraham's village, Daniel in the lions' den and the Tower of Babel. The prophet Jonah, who asked people to repent and return to God, also lived in Nineveh, according to the Bible.

If it takes place as planned, the papal visit can heal some wounds created by political Islam and its fanatical moves. At the very least, the visit will help put some global media focus on the neglected Iraqi Christians' plight.