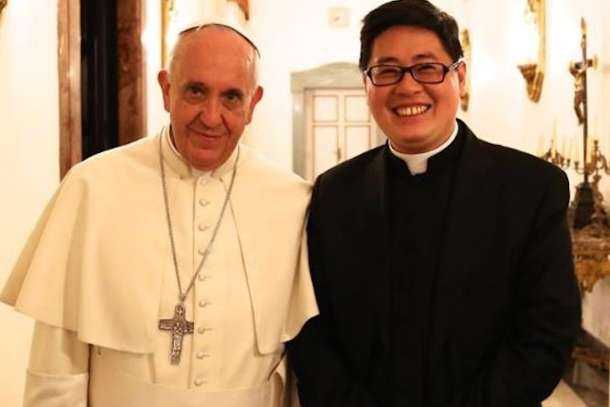 Pope Francis has appointed a Filipino priest as the newest member of his household.

The Archdiocese of Cebu has announced that Father Jan Thomas Limchua was given the honorific title “Monsignor” by the pope after being named papal chaplain.

The announcement was confirmed on social media by Father Limchua, who is from Cebu City in the Visayas region.

“With much humility and gratitude, I share to you the news that His Holiness Pope Francis has deigned to grant me the honorific rank of ‘Chaplain of His Holiness’ (Monsignore Cappellano di Sua Santità), thus making me officially part of the Pontifical Family,” said Father Limchua in the statement.

A papal chaplain is a title given to a priest by the pope with certain privileges with respect to ecclesiastical duties and vestments.

Father Limchua has thanked his family and Cebu Archdiocese for their prayers and support during his stay at the Vatican in Rome.

“While I give thanks to the Almighty and to His Holiness for such a privileged honor bestowed upon me, my family and the Archdiocese of Cebu, I graciously ask for your continued prayers as I, with my own limitations, commit myself more deeply to serve the Church with joy, humility and generosity. AMDG (Ad Majorem Dei Gloriam),” Father Limchua added.

Father Limchua, 36, had worked under Vatican Secretary of State Cardinal Pietro Parolin as an official in the Section for Relations with States of the Holy See.

He was ordained a priest in Cebu Archdiocese before he left for Rome to pursue his doctorate studies in canon law at the Pontifical Lateran University.

The Cebuano priest also had diplomatic studies formation at the Pontifical Ecclesiastical Academy which qualified him to serve at apostolic nunciatures in Egypt and elsewhere in Africa.

“This is a great honor to Cebu and to the Philippines. His appointment is an indication that Pope Francis is pleased with his service to the pope and to the Catholic Church,” said Msgr. Joseph Tan, spokesperson of the Archdiocese of Cebu.

Cebu churchgoers also expressed their prayers and support to the newest Filipino clergyman working at the Vatican.

“We congratulate Father Limchua for this great honor. Not all priests have the honor of being a member of the papal household. This means he will be close to the Holy Father and we wish that he brings to the pope the love of all Cebuanos and Filipinos,” Cebu churchgoer Abigail Fragante told UCA News.

“It’s clear that Filipinos have earned the heart of Pope Francis. Appointing Cardinal [Luis] Tagle as prefect of the Congregation for the Evangelization of Peoples is also a sign of this trust.”