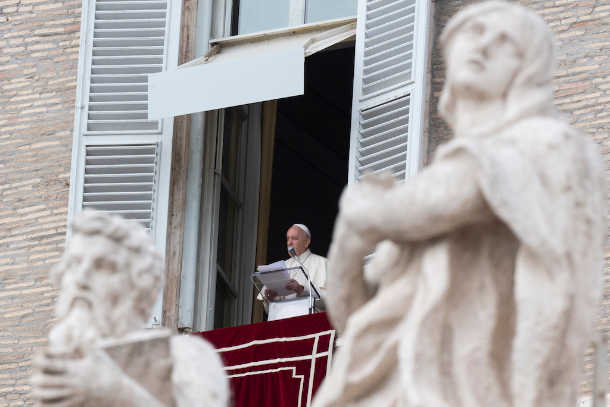 Pope Francis addresses the crowd from the window of the apostolic palace overlooking St. Peter's Square in the Vatican during his Sunday Angelus prayer on Nov. 3. (Photo by Tiziana Fabi/AFP)

As Pope Francis prepares to embark on his fourth trip to Asia in the seventh year of his pontificate, he is delivering in a big way on the promise he made shortly after his election that he would make Asia a key focus of his papacy.

When he appointed Filipino Cardinal Luis Tagle as head of Catholic aid agency Caritas Internationalis, the cardinal revealed that the pope had told him he wanted an Asian in the position because “the future of the Church is in Asia.”

“It is not a matter of honor. Is it a challenge, a prophecy or a great calling? We do not know. But it is surely a matter of great responsibility, a great mission,” the cardinal said.

And while the Church only has an estimated 120-140 million followers in North, Southeast and South Asia from about 1.2 billion worldwide, it continues to grow and Francis very clearly sees the opportunities.

The pontiff’s visits to Thailand and Japan from Nov. 20-26 follow his journeys to South Korea for World Youth Day in 2014, Sri Lanka and the Philippines in early 2015 and Myanmar and Bangladesh in late 2017. Each trip had its own unique triumphs and we can expect no less this time around, especially the Japan leg, which is heavy with both personal and thematic symbolism.

And on Sept. 22, 2018, the Vatican also inked a still secret and controversial deal on the appointment of bishops with China. Movement on the provisional agreement has proved extremely slow on the Chinese side amid an escalation of Beijing’s crackdown on religion, which is focused particularly on so-called “underground” Catholic and Protestant churches, whose followers number 60-100 million, as well as China’s 22 million Muslims. It has also targeted young people.

It was in Seoul, during World Youth Day in August 2014, that it was clear Francis, only 17 months into his pontificate, was already a hugely popular pope, feted as something of a religious rock star by Catholic youth excited by the change from the deeply traditional and conservative papacies of St. John Paul II and Benedict XVI.

The importance of youth of saving the planet and creating a more modern Church for future generations has been a constant theme of Francis’ papacy. This is unlikely to stop as on most of his overseas visits he holds a special Mass for young people. This will happen in Bangkok, while he will meet young Christians and non-Christians at St. Mary’s Cathedral in Tokyo.

It was also en route to Seoul in August that Francis sent a telegram to Chinese leader Xi Jinping, who had been elevated to secretary-general of the ruling Communist Party, about restarting talks with Beijing that had been dormant for almost a decade.

Francis’ voyage to Thailand is the first by a pope since St. John Paul II visited in 1984. His trip to Japan is the first by a pontiff since St. John Paul II visited in 1981 and represents the end of a long personal journey. As a young priest, Francis had been determined to travel to Asia as a missionary. With his first choice of China unavailable because of the closing of the country to foreign missionaries and Catholic priests by the Communist Party, Japan became Francis’ destination of choice.

"Over time, I felt the desire to go as a missionary to Japan, where the Jesuits have always carried out very important work,” he wrote as Cardinal Jorge Mario Bergoglio in his 2019 book El Jesuita. Bergoglio was diagnosed with a heart ailment and deemed physically unsuitable for missionary life, but it is something he has carried with him all his life.

On overseas trips, particularly on visits to Asia, Francis often speaks about the importance of mission and evangelization.

Francis’ travel schedule in Asia already compares favorably with that of the great travelling pope, St. John Paul II, despite his relative age as an octogenarian compared with the saint’s youth at the start of his long pontificate. Indeed, in visiting Myanmar, Bangladesh and Sri Lanka, Francis made history with the first-ever papal visits to these countries.

The only Asian nations where St. John Paul II ventured that Francis has not yet visited are Timor-Leste, still at the time part of Indonesia when the Polish pope made a deeply historic visit in 1989, and India, where he undertook a substantial 10-day journey from north to south in 1986 and again to Delhi in 1999.

India is very much on Francis’ wish list, something he has made very public, and the recalcitrance of the Indian government remains a sore point with the Vatican, especially since St. Teresa of Kolkata was canonized by Francis in 2016. The Holy See failed last time, in 2017, to get the permission of the increasingly Hindu nationalist government of Narendra Modi, a knockback from which Myanmar reaped the benefits.

Now comfortably elected for a second term, Modi may find the temptation to have multiple photo opportunities with Pope Francis too hard to resist and see it as a way, perhaps, of deflecting his mounting programs of religious repression. This is being writ large in Jammu and Kashmir, the disputed Muslim-majority state that in August had its autonomy revoked, sparking outcry across the globe.

But while India remains a disappointment to be resolved, we should note the successes of Francis’ Asian visits. He opened communications after many years of silence with Beijing — followed by a deal, however limited and initial — celebrated Sri Lanka’s first saint, and made a triumphant visit to Asia’s Catholic heartland of the Philippines, comforting victims of Typhoon Yolanda and pulling focus on the 2015 Year of the Poor.

In Myanmar and Bangladesh in late 2017, he played a delicate piece of two-step diplomacy, soft-pedaling in public over the then raw Rohingya crisis in Myanmar, where at both official and ground levels the actions of the army forced the troubled Muslim ethnic minority into Bangladesh. But privately he is understood to have been far tougher with civilian leader Aung San Suu Kyi and her military counterpart Gen. Min Aung Hlaing.

He then triumphantly staged an ecumenical service in Bangladeshi capital Dhaka, welcoming Christians, Muslims, Hindus and Buddhists on stage for prayers. They included representatives from the Rohingya people, instantly silencing critics of his gently prodding stance in Myanmar. In this way he shone an international spotlight on the crisis of up to one million refugees being forced from their homeland by a brutal military and a racist, increasingly religiously intolerant regime.

On the Japan leg of his forthcoming trip, he has similar opportunities for subtle but clear diplomatic messages — and who would bet against him taking them? The Vatican’s deal with China and the ongoing repression of Christians by North Korea’s murderous regime will be lurking.

If he is trying to balance China’s glacial progress on his bishop deal and its assault on worship of all religions by his mere presence in Japan — China’s hated neighbor — he will already have hit the mark on the day the tour was announced.

It is not drawing too long a bow to see his appearances in Japan, where a stadium Mass in Nagasaki is already fully booked, as a test. Any Chinese reaction will give him a clue to where he really stands with Xi Jinping. At a guess, Francis will, for sure, give the Chinese some face, wave hello at least and talk up his deal while he is being treated as a rock star and pressing Japanese Prime Minister Shinzo Abe's flesh, surrounded by only one version of the church loyal only to Rome.

He will only be helped by the infectious enthusiasm of Japanese crowds who have shown, with the recent wildly successful Rugby World Cup, just how keen they are to embrace the new. The Chinese, to put it mildly, will be put on the spot.

This is the first in a series of commentaries on Pope Francis' apostolic visit to Thailand and Japan and the issues around the journey.