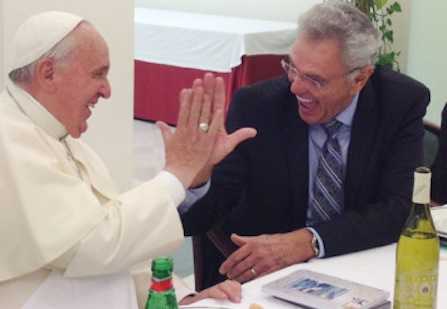 What does it take to produce the first-ever papal high-five? A meeting with American televangelists, apparently.

The gesture came during a three-hour meeting of Pope Francis and Texas televangelists Kenneth Copeland and James Robison, just weeks after the pontiff met with televangelist Joel Osteen and other religious leaders. At the June 24 meeting, Robison said he was so moved by Pope Francis’ message of the gospel that he asked the translator to ask Francis for a high-five. The pope obliged, raised his arm and the two men smacked hands.

The televangelists are among some wealthier U.S. evangelicals who have recently met with Francis, who has called for a focus on the poor and a simple lifestyle for clergy. In March, the pope met with members of the Green family, the Oklahoma billionaires whose company, Hobby Lobby, won their challenge to President Obama’s contraception coverage mandate at the Supreme Court last week.

Copeland and Osteen have been criticized by some as teaching “health and wealth” prosperity theology, the belief that faith can increase one’s wealth. But from his humble shoes to his simple Fiat, Francis has set a decidedly un-extravagant example.

“The prosperity gospel seems to be fundamentally opposed to the message that Francis has been spreading. But he has shown that he’s willing to meet with just about anyone,” said Michael Peppard, a professor of theology at Fordham University.

“Joel Osteen seems to have a charismatic authority among a large amount of people. Maybe Francis is channeling Jesus: If you disagree with someone, meet with them.”

Last year, Francis fired the German “Bishop of Bling,” Franz-Peter Tebartz-van Elst, for spending $43 million on a fancy residential complex. Copeland, meanwhile, was one of several televangelists targeted by Sen. Charles Grassley, R-Iowa, in 2007 for their lavish lifestyles.

Copeland declined to provide full information about his finances, and the investigation wrapped up in 2011 with no penalties for the pastors who did not cooperate and no definitive instances of wrongdoing found.

Copeland was unavailable for comment about his meeting with the pope, but in an address to his congregation, he played a recording from earlier this year where Francis spoke on a smartphone camera and called on Christians to set aside their differences.