Seasoned Vatican observer spots some trends and looks ahead 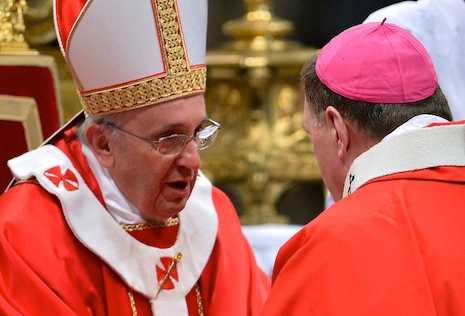 The first 100 days of a pope are not like the first 100 days of a president or prime minister or a CEO. A pope thinks long-term, and is under less pressure to put forward a series of short-term goals or programs. Most of the issues facing a pope transcend the pragmatic and the political. They require careful thought, prayer and consultation, not a string of policy statements.

For journalists, though, 100 days is a marker that requires evaluation and commentary. It was certainly the hot topic at the Catholic Media Conference this week in Denver, where I gave a talk this morning to several hundred Catholic communicators.

So what do we know about Pope Francis after 100 days in office? We’ve had no important documents, few significant appointments and no earth-shaking reforms of the Roman Curia.

But we do have a healthy dose of papal thinking and papal preaching – on everything ranging from clerical careerism to sweatshop employment. And we have a number of papal gestures that speak volumes to people inside and outside the church.

I don't want to recap Pope Francis’ 100-day “greatest hits” here. Instead, I’d like to identify a few core characteristics and directions that seem to be emerging:

1. Francis has relocated the papacy outside the Roman Curia.

First, choosing to live in the less formal Vatican guesthouse instead of the papal apartments has turned out to be a crucial decision, because geography counts at the Vatican. The papal apartments are surrounded by Roman Curia offices, deep inside the Apostolic Palace, and Francis would have been much more isolated there. He is a people person, after all.

Second, the pope has named a group of eight cardinals – now to be expanded to nine – to advise him on matters of church governance and Roman Curia reform. Only one is a member of the Roman Curia. Nothing said more clearly that Francis intends to rely less on Vatican insiders and more on the world’s bishops when it comes to governing.

Third, much of the pope’s preaching has come in morning Masses at the Vatican guesthouse, in off-the-cuff homilies that are brief, insightful and sharply worded. The Vatican bureaucracy doesn't even consider these homilies part of the pope’s real Magisterium, and has yet to publish full texts. One reason, I think, is that unlike formal papal speeches, these extemporized talks don’t go through the usual bureaucratic machinery. They are less controlled by the Curia.

Full Story: Settling in for a fascinating journey