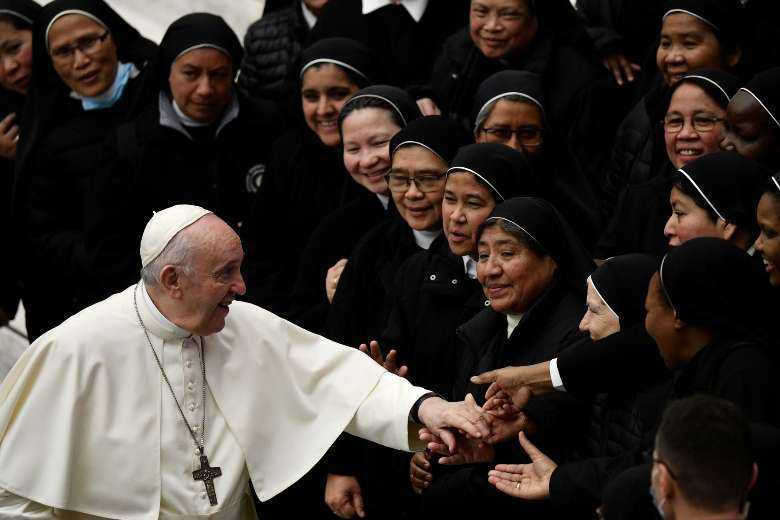 Pope Francis salutes nuns at the end of his general audience at the Paul VI Hall at the Vatican on Dec. 1. (Photo: AFP)

Pope Francis arrives on the divided island of Cyprus today as part of a landmark trip to push two of his priorities: the plight of migrants and inter-confessional dialogue.

The pontiff, 84, will land at Larnaca airport on the Mediterranean island for a two-day visit before continuing to Greece, another front in Europe's refugee crisis. Cypriot authorities have described his trip as "historic".

Francis will be the second Catholic pontiff to set foot on Cyprus, which has a Greek Orthodox majority. Pope Benedict XVI visited in 2010.

Migration will be a key feature of his visit to the country, which complains of bearing a disproportionate burden of the flow of people trying to reach the European Union.

The trip will culminate in a Mass at an open-air football stadium in the capital Nicosia, eagerly awaited by the estimated 25,000 Catholics in a country of about one million people.

The Catholic minority includes thousands of Maronites whose ancestors arrived from Syria and Lebanon, but most are overseas workers from the Philippines and South Asia, along with African migrants.

More than 500 Cypriot police will be on duty to secure the visit.

On Dec. 3 afternoon, Francis will hold an ecumenical prayer with migrants at a church which serves worshippers from dozens of nations near the Green Line that splits the city.

According to Cypriot authorities, negotiations were underway with the Vatican to organise the transfer to Rome of migrant families currently in Cyprus.

That would repeat a gesture which Francis made on the Greek island of Lesbos in 2016 when he returned to the Vatican with three Syrian Muslim families who had fled bombing in their homeland.

In a video message ahead of the trip, the pope described the Mediterranean as a "huge cemetery" in references to the thousands of migrants who have died attempting to reach European shores to escape conflict and poverty.

The pope has long called for better protection for migrants, and last weekend expressed his pain over the recent drowning of 27 people who tried to cross the Channel and those blocked at the Belarus-Poland border.

"We know that Pope Francis goes above all to the most vulnerable and marginalized. Today, these are the migrants who have been forced to leave their countries in pain or illegally," Maronite Archbishop Selim Sfeir of Cyprus told AFP.

Cypriot authorities say the island has the highest number of first-time asylum applications among all 27 European Union members relative to its population. They accuse Turkey of allowing migrants to cross from the north.

Cyprus has been divided since 1974 when Turkish forces invaded and occupied the northern third of the island in response to a coup sponsored by the Greek junta in power at the time.

Only Ankara recognises the self-proclaimed Turkish Republic of Northern Cyprus.

The division saw about 200,000 people, including many Maronites from the north, displaced from their homes.

UN-sponsored negotiations seeking to reunify the island have been suspended since 2017.

In visiting the Orthodox countries of Greece and Cyprus "the (pope's) message surely is about dialogue," Latin Patriarchal Vicar for Cyprus Jerzy Kraj told AFP.

The Orthodox Church has been separated from the Catholic Church since the schism of 1054 between Rome and Constantinople, today's Istanbul.

On Friday morning, Francis will meet the Orthodox bishops of Cyprus at the Archbishop's Palace in Nicosia's Old City close to the UN-patrolled buffer zone dividing north and south.

That will follow a meeting with President Nicos Anastasiades at the Presidential Palace on Thursday evening.

Anastasiades will propose his country's vision for "a just and viable solution to the Cyprus problem", an official statement said.

A Vatican source said the pontiff is expected to deliver "a plea for unity and peace" while in Cyprus.

The pope's first stop after landing will be the Maronite Cathedral of Our Lady of Grace in Nicosia. There, he will meet the Maronite Patriarch Bechara al-Rahi along with other Maronite figures. Rahi is travelling from neighboring Lebanon, which has been mired in political and economic turmoil.

Large numbers of other Lebanese have also arrived in Cyprus for the event, officials in the Maronite Church said.

The pope is expected to make mention of Lebanon and its crisis during his public remarks.

For Elena, a Maronite Cypriot in her fifties, Francis can't arrive soon enough.

"I asked for a day off work to be able to join this historic event," said the woman, who belongs to a new choir rehearsing for the papal Mass.

"We love the pope very much because he is an exceptional person," Elena added, describing him as "humble and a defender of the poor and of peace".