He underlines his determination to change the Vatican: full text included 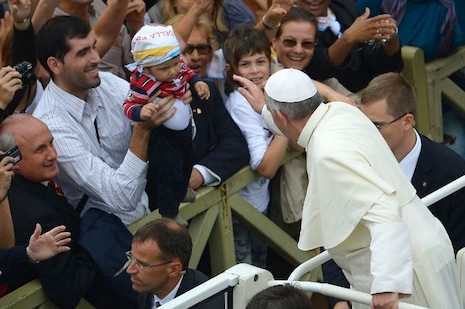 By CWN for CatholicCulture.org

Pope Francis has again caused a sensation with a lengthy interview, telling the Italian daily La Repubblica that he will work toward a Church “that is not just top-down but also horizontal.”

The interview—which appeared on the same day the Pope began consulting with the Council of Cardinals about possible Vatican reforms— ranged over the Pope’s hopes for the Church, his concerns about youth unemployment and neglect of the elderly, his favorite saints, and other topics.

La Repubblica has made the entire interview available in an English-language translation.

The interview was conducted by Eugenio Scalfari, the founder of the left-leaning Repubblica. Earlier in September the newspaper had published a long letter from Pope Francis, responding to an editorial by Scalfari. Now, Scalfari reveals, the Pontiff followed up with a phone call, suggesting a private meeting. That meeting, which took place last week at the Pope’s apartment in the Casa Sanctae Marthae, furnished the material for the interview.

Scalfari, a professed non-believer, opened the conversation by expressing some misgivings that the Pope might try to convert him. The Pope quickly put him at ease. “Proselytism is solemn nonsense,” he said. “We need to get to know each other.”

Nevertheless, the Pope challenged his interlocutor at several points in their conversation. When Scalfari said that he did not believe in the existence of a soul, the Holy Father replied: “You do not believe in it but you have one.” And when the Italian journalist said that the Pontiff would not be able to convert him, the Pope replied: “We cannot know that—but I don’t have any such intention.”

In answer to a leading question about the problems facing the Church today, Pope Francis answered:

The most serious of the evils that afflict the world these days are youth unemployment and the loneliness of the old... You tell me: can you live crashed under the weight of the present? Without a memory of the past and without the desire to look ahead to the future by building something, a future, a family? Can you go on like this? This, to me, is the most urgent problem that the Church is facing.

Regarding the need for change within the Church, the Pope complained about a “Vatican-centric” view prevailing in Rome, and said “I’ll do everything I can to change it.” He said that the atmosphere of the Vatican can nurture narcissism, with courtiers flattering superiors and protecting their own temporal interests. “The court is the leprosy of the papacy,” he said.

Read the full text of the interview with La Repubblica here