Now featured on Esquire, the New Yorker and a leading gay monthly 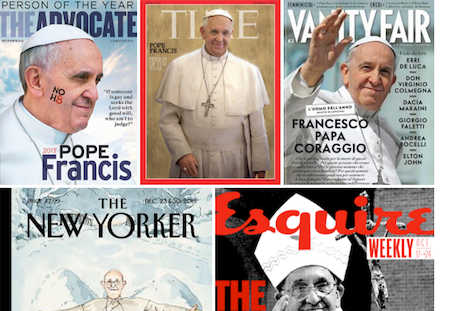 To paraphrase Shakespeare’s musing on a name, “What’s in a cover?”

In the past week, we’ve seen Pope Francis on the cover of Time as the magazine’s “2013 Person of the Year,” followed by The New Yorker’s whimsical cover of the pope as a snow angel. Now, most improbably, he’s on the cover of The Advocate, the magazine for gays, lesbians, bisexuals and transgender people, that put the message “NO H8″ (No hate) on his cheek. What’s next? Sports illustrated? Jack and Jill?

If you ever wanted to show that someone reaches across all segments of society, this flurry of magazine covers may be it.

Each magazine hailed the pope for elevating the conversation beyond the polarization where people view one another as adversary rather than sibling. The pope’s recent World Day of Peace message notes that war began when Cain saw Abel as competitor rather than brother.

Time included an essay that was occasionally poetic as it described the man from Argentina who is comfortable rubbing elbows with the poor and uncomfortable with the income inequality that blots our world. Managing Editor Nancy Gibbs explained the choice this way:

“The heart is a strong muscle; he’s proposing a rigorous exercise plan. And in a very short time, a vast, global, ecumenical audience has shown a hunger to follow him. For pulling the papacy out of the palace and into the streets, for committing the world’s largest church to confronting its deepest needs and for balancing judgment with mercy, Pope Francis is Time’s 2013 Person of the Year.”

The New Yorker included a lengthy essay by former priest James Carroll, a regular nipper at the heels of church leaders. Impressed by the pope who reminds him of Pope John XXIII, he recalled seeing Pope Francis caress and bless a man with facial tumors.

“I realized, as the pope pressed his hands on the bowed head of the stricken man, that curing and healing are not the same thing. To cure is to remove disease. To heal is to make whole, and wholeness can belong as much to the infirm as the healthy. ‘The first reform,’ Pope Francis said, ‘must be the attitude.’”