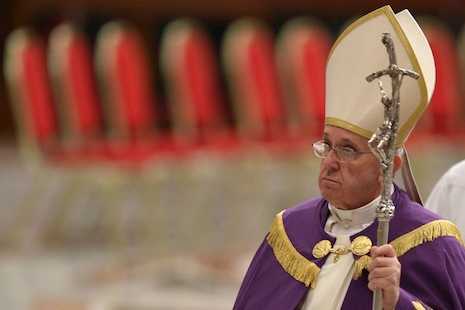 Pope Francis on Friday marked the second anniversary of his election by declaring a jubilee year that will be interpreted as a powerful signal of his commitment to reforming the Church.

The extraordinary holy year, dedicated to the theme of mercy, has been called to celebrate the 50th anniversary of a groundbreaking Vatican council that transformed how the Church related to the modern world, most notably ending the obligation for religious services to be conducted in Latin.

The jubilee year will begin on December 8 and run until November 20, 2016. December 8 is one of the holiest dates in the Catholic calendar as the Feast of the Immaculate Conception and is also the date on which the Vatican II council closed in 1965.

Speaking in St Peter's cathedral, the 78-year-old pontiff described the year's start date as being "of great significance, for it impels the Church to continue the work begun at Vatican II."

Vatican II is considered to be one of the defining moments in the history of the Catholic church — the point at which the clerical hierarchy accepted that some centuries-old ways of thinking and acting had to be jettisoned if the institution was to remain relevant as the sixties began to swing.

Fifty years later, the Church is facing a similar set of dilemmas and is beset by divisions over how to respond to them and close the gap between what it officially preaches and how many of its followers actually live their lives in the early 21st Century.

Deep divisions over how the Church should relate to homosexual, divorced and co-habiting believers were aired at an inconclusive, sometimes rancorous, synod of bishops in October-November 2014. They will be revisited when senior clerics re-assemble in Vatican City this October.

Francis, the first pope to hail from Latin America, is regarded by most of the world as having been a huge success in his two years at the helm of the Church.

His easy charm, decisive approach to issues such as pedophile priests and his pleas for a more merciful and worldly approach on questions like homosexuality and divorce have endeared him to a much broader public than his conservative, dour predecessor Benedict XVI could reach.

But he has not endeared himself to everyone within the Church.

The forces of passive resistance and inertia are holding up his efforts to reform the Vatican's bureaucracy and his tendency to speak his mind has caused concern amongst conservative theologians.

They fear his populism may provide cover for an edging away from long-established doctrinal stances, especially on the issues at the center of the synods on the family.

A pope in a hurry

The decision to announce the jubilee may reflect Francis's apparent belief that he is not destined to spend a long time in St Peter's.

"I have a feeling my pontificate will be brief," he told Mexico's Televisa channel in an interview to mark his anniversary. "Four or five years, I don't know. Two years have already gone by.

"It is a vague feeling I have that the Lord chose me for a short mission. I am always open to that possibility."

Francis has hinted in the past that he could emulate his predecessor Benedict XVI, who became the first pope to resign in seven centuries when he stepped down in February 2013.

Intriguingly, when asked if he liked being pope, Francis replied: "I don't not like it," before expanding on his dislike of travelling and his fondness for the comforts and familiarity of home.

Despite that, Francis insisted he did not feel lonely in the top job, although he did confess to sometimes longing for the anonymity enjoyed as the parish priest he once was.

One thing he would really like is to be able to go out of the Vatican one day without being recognized and "go and eat a pizza," he said. AFP