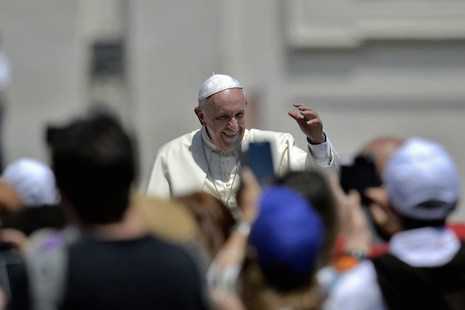 By Lord Deben for Catholic Herald

The unvarnished truths of the Gospel, compellingly written and lovingly interpreted, make Laudato Si an unforgettable document. I began reading it, fascinated as to what Pope Francis would make of the science and politics of climate change. I continued simply overwhelmed by the direct evangelical call to action, personal and collective. The encyclical is no mere commentary on the world’s current concerns — although its narrative of the facts of environmental and social degradation is succinct and discerning. Instead, it lifts and intensifies the debate by demanding that we see these great issues of pollution, poverty and powerlessness as direct personal challenges — challenges to the way each one of us lives, to the businesses we run, the jobs we do, and the choices we make.

So, when the environmental world welcomes the pope as a powerful ally and the religious right dismisses him as a disingenuous radical, both have missed the essential point. This is the Gospel call, as disconcertingly direct today as was Jesus’s confrontation with the rich young man, the scribes and the Pharisees, or the moneychangers in the Temple. That’s the unique quality of the encyclical. It is not just the declaration of assent to a program of international environmental action, but also the prophetic voice of the Church. It is therefore far more fundamentally disturbing and uncomfortable, demanding an individual response that will change our lives forever.

Pope Francis is at pains to set the whole process in its religious context. He sees this encyclical as the natural development of the teaching of the Church, not as some immediate response to a secular agenda. Firmly rooted in the Bible, he draws continual inspiration from St Francis of Assisi and develops the teachings of John Paul II and Paul VI, and even brings in the particular insight of the Ecumenical Patriarch, Bartholomew, whose long-standing commitment to environmental theology he celebrates.

The stage is then set for a journey to the heart of the Christian revelation, but not before we have a bold and disarmingly direct recital of the facts of the present crisis: “The earth, our home, is beginning to look more and more like an immense pile of filth.” That is because human beings have created a throwaway society that not only pollutes the planet but also does it at the particular expense of the poorest. Even so, to that bald statement of the present truth, the encyclical offers immediate hope. “We have not yet managed to adopt a circular model of production capable of preserving resources for present and future generations, while limiting as much as possible the use of non-renewable resources, moderating their consumption, maximizing their efficient use, reusing and recycling them.” Already the pope is pointing to another way which could provide a sustainable future for all.

Francis then turns directly to his most urgent message. “Climate change … represents one of the principal challenges facing humanity in our day. Its worst impact will probably be felt by developing countries in coming decades.” The survey of the science that follows is beautifully written and extremely accurate. There is now no serious scientific argument that does not accept that climate change is happening and that it is overwhelmingly caused by human action, particularly through the burning of fossil fuels. No learned society or major climate institution doubts that reality or the extensive risks of climate change. Nonetheless, the encyclical takes time to refer to the elements — from volcanic activity to sunspots — that have been queried, but it does not shy away from the truth. We are causing climate change. It is serious and, unless we act comprehensively, it could destroy our homeland, the earth. Those who are most immediately at risk are, as so often, the poor who haven’t the resources to adapt. Some live in coastal areas where their homes are increasingly threatened by storms and rising sea levels. Others have to leave their traditional homes as the animals and plants upon which they depend are driven out by a now inimical climate.

Yet Pope Francis is unequivocal. This is a universal threat, and “If present trends continue, this century may well witness extraordinary climate change and an unprecedented destruction of ecosystems, with serious consequences for all of us.” There is no get-out for that dwindling number who still refuse to accept the science. This is so overwhelming a risk that it requires action by us all.

This clarity explains why some on the right in America and Britain have been quick to dismiss the whole encyclical. Indeed, Lord Lawson is quoted as saying that the pope’s words are based on “junk science, junk economics, and junk ethics”. Leaving aside the arrogance that such a reaction betrays, the reality is that these dismissers/deniers cannot bear the searchlight of the Gospel. For that is the source of the penetrating power of Pope Francis’s words. He is not entering into an argument with the self-interested opponents of the science. Instead, he simply exposes their views to the radiance of Gospel teaching and, like the rich young man and the Pharisees and Sadducees, they cannot bear its brilliance.

Nor, indeed, can the rest of us. This is a deeply uncomfortable encyclical because it is not content simply to face up to the institutional and moral issues of climate change and environmental degradation, but addresses the deeper tragedy of humanity itself.

Here the text quotes Benedict XVI: “The external deserts in the world are growing, because the internal deserts have become so vast.” In addressing directly the environmental issues, Pope Francis makes it utterly clear that “our concern cannot be limited merely to the threat of extreme weather events, but must also extend to the catastrophic consequences of social unrest.

Obsession with a consumerist lifestyle, above all when few people are capable of maintaining it, can only lead to violence and mutual destruction.” It is this that some elements of the right finds so difficult. And, indeed, it is this that is so unsettling for all of us in the rich world. The pope is saying that we simply cannot save the world from the consequences of climate change if we continue to consume at a rate that is possible because it is only available to the few. We need to hear “both the cry of the earth and the cry of the poor”.

But the analysis is deeper even than that. The Holy Father is talking about the deepest nature of humankind when he shows how our headlong rush for more and more stuff is the inevitable result of the emptiness within. We are diminishing, damaging and ultimately destroying ourselves. We are involved in a vain attempt to fill the void which modern society creates in the heart of man. It is here that the encyclical is so telling. By our assertion that we are the masters now we lose our sense of gratitude, our joy in small things and our respect for the worth of even the least of God’s creatures.

By embracing the throw-away society we discard rather than reuse or revalue. What characterizes our attitude to material things extends to the natural world and even to humanity itself. The old, the disabled, the unborn are often seen as inconvenient and their intrinsic worth ignored. We have created a world in which what the market decides and what science and technology makes possible is accepted as inevitable and the way of progress. We have no means to insist that we weigh the effects of such “progress” on society as a whole and particularly on the vulnerable within it.

Yet, this is in no sense a condemnation of market economics or of science and technology. Quite the reverse. It sees all three as expressions of mankind’s God-given intelligence. But they are not gods themselves. They must be expressed and used within a moral order, otherwise “we create immense inequality, injustice and acts of violence against the majority of humanity, since resources end up in the hands of the first comer or the most powerful: the winner takes all.” As Francis writes: “Once more, we need to reject a magical conception of the market, which would suggest that problems can be solved simply by an increase in the profits of companies or individuals.”

We cannot properly take the view that things will work their way out, that the market is perfect and will provide. Otherwise, “whatever is fragile, like the environment, is defenseless before the interests of a deified market, which becomes the only rule”. Without intervention from Factory Acts to child protection, concern for indigenous rights to fair taxation and the control of monopolies and cartels, the market is unrestrained by the moral order.

Nor can any of us take refuge in ignorance or uncertainty. This is the most convenient course of all, yet Pope Francis makes it clear that it is not an acceptable way out: “Such evasiveness serves as a license to carrying on with our present lifestyles and models of production and consumption. This is the way human beings contrive to feed their self-destructive vices: trying not to see them, trying not to acknowledge them, delaying the important decisions and pretending that nothing will happen.”

Francis continues: “We need instead a society in which the economic and social costs of using up shared environmental resources are recognized with transparency and fully borne by those who incur them, not by other peoples or future generations.” Only then “can those actions be considered ethical”.

Nor does the pope duck the practical examples that such an attitude demands. He looks at carbon credits, biotechnology and genetic modification. He considers technological progress, the information society and the challenge of virtual reality. At every point he shows himself fully in touch with the world to which he seeks to reveal the truths of the Gospel. It is this authenticity that strikes home so directly. These are not the words of a commentator, still less of a philosopher, but the fatherly injunctions of one who has understood the deepest concerns of his children.

Like all children, we will resent the analysis. Indeed, the truer we know it to be, the more resentful we are likely to become. Yet the truth is stark and the moral requirement is to accept and act on that truth. Those lifestyles that rape the earth and destroy the climate’s equilibrium also destroy man’s soul. We were not made for this and we have it in our power to change — to change ourselves and the world. And despite his uncompromising challenge, Francis remains utterly hopeful. This is no puritan dirge. Rather, it is diffused with Christian joy. “For all our limitations,” Francis concludes, “gestures of generosity, solidarity and care cannot but well up within us, since we were made for love.”

Lord Deben is chairman of CCC, the UK’s independent Committee on Climate Change.

Original story: The Pope’s critics are acting like children