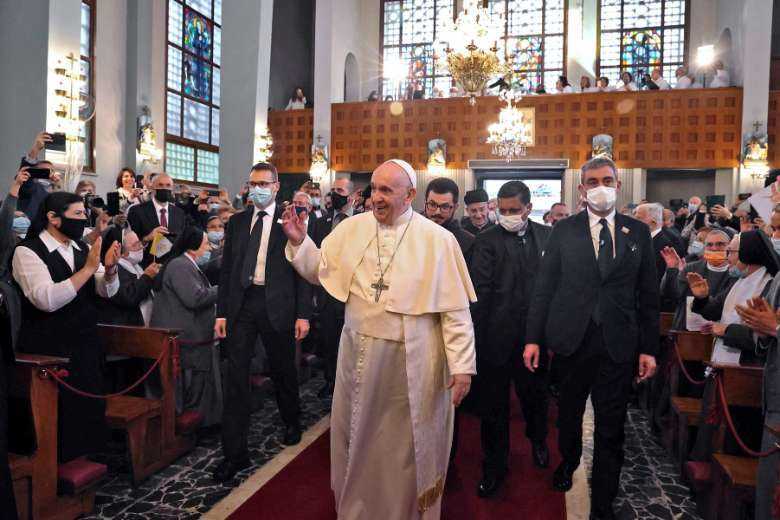 Pope Francis arrives for a meeting at the Maronite Lady of Grace Cathedral in the Cypriot capital Nicosia on Dec. 2. (Photo: AFP)

Pope Francis was set to speak to thousands of Catholics at an open-air Mass in Cyprus today, the second day of a visit to the divided island that has focused heavily on the plight of migrants.

As a gesture of solidarity to those fleeing poverty and conflict, the 84-year-old pontiff was expected to offer 50 migrants now in Cyprus a chance for a new life in Italy, the president of the host country said.

Many of the 7,000 faithful expected at Nicosia's main football stadium are overseas workers from the Philippines and South Asia who make up a large proportion of the 25,000 Catholics in mainly Greek-Orthodox Cyprus.

The pope will later hold an ecumenical prayer service with asylum seekers from dozens of nations at Nicosia's Church of the Holy Cross, located near the UN-patrolled Green Line that splits the country.

On his 35th international trip since becoming pope in 2013, Francis is the second Catholic pontiff to visit Cyprus after Benedict XVI went in 2010. He travels on to Greece on Dec. 4.

His itinerary today started with a visit to the Holy Archbishopric and the nearby Apostle Varnavas Cathedral in the walled Old City not far from the barbed wire, sandbags and bullet-marked abandoned houses that mark the buffer zone of Europe's last divided capital.

We need to welcome and integrate one another and to walk together as brothers and sisters, all of us

Cyprus has been split since 1974 when Turkish forces invaded and occupied the island's northern third in response to a military coup sponsored by the Greek junta in power at the time.

Only Ankara recognises the self-proclaimed Turkish Republic of Northern Cyprus, and tensions simmer between the two sides, with the south accusing the north of sending irregular migrants across the dividing line.

Francis on Dec. 2 bemoaned "the terrible laceration" of Cyprus while also urging greater unity in Europe, instead of nationalism and "walls of fear", as the continent faces an influx of refugees and migrants.

"We need to welcome and integrate one another and to walk together as brothers and sisters, all of us," he said.

Speaking in a Maronite church in Nicosia, the pope said "the presence of many of our migrant brothers and sisters" had made Cyprus "a true point of encounter between different ethnicities and cultures".

The island's experience served as a reminder to Europe, he said, that "we need to work together to build a future worthy of humanity, to overcome divisions, to break down walls, to dream and work for unity".

The majority-Greek speaking south accuses the north of sending migrants across the UN-patrolled Green Line and also says it receives the highest number of first-time asylum seekers of any EU member country.

The pope, who has long called for better protection for migrants, in a video message ahead of the trip described the Mediterranean as a "huge cemetery" for migrants who drowned.

Before his departure from Rome, Francis met refugees from Syria, Congo, Somalia and Afghanistan who had come via the Greek island of Lesbos and now live in Italy.

The way of peace, which reconciles conflicts and regenerates the beauty of fraternity, has a single word as its signpost. That word is dialogue

"I think of the deep suffering of all those people unable to return to their homes and their places of worship," said the pope.

"The way of peace, which reconciles conflicts and regenerates the beauty of fraternity, has a single word as its signpost. That word is dialogue."

Turkish Cypriot leader Ersin Tatar, meanwhile, accused the south of seeking to use the trip to score "political goals against Turkey and the Turkish Republic of Northern Cyprus".

It was a "source of sorrow for us that Pope Francis will visit Greek Cyprus only," he said.

"There are two peoples in Cyprus. Not only Christian Greeks but also Muslim Turks live in Cyprus. This is one of the basic realities of Cyprus."