'In the name of all those who have persecuted you, who have harmed you ... I ask for your forgiveness,' pope says 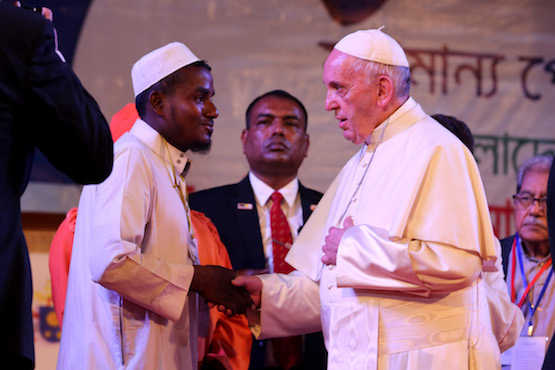 Pope Francis speaks with Muhammad Nurullah, a Rohingya refugee from Myanmar’s Rakhine State, during a meeting in Dhaka on Dec. 1. (Photo by Joe Torres)

Pope Francis did not only refer to Muslim Rohingya refugees by name when he met 16 of them in Dhaka on Dec. 1, he called them "the presence of God today."

It was the first time the pontiff referred to the persecuted minority by word in the wake of criticisms that he has been avoiding the use of the term during his visit to Myanmar early this week.

Pope Francis shook hands and prayed with 16 Rohingya refugees — 12 men, three women, and a child — who travelled from the southern Bangladeshi city of Cox’s Bazar, during an Interreligious and Ecumenical Meeting for Peace at the residence of the Dhaka Archbishop Dec. 1.

In what turned out to be an emotional encounter, the pontiff said, "We all are images of God, including the Rohingya."

"They too are images of God, the creator," he said. "Today, the presence of God is also called Rohingya," he added.

Addressing a gathering of Christian, Muslim, Buddhist and Hindu leaders, Pope Francis said religious stories tell of a creator making human beings from a bit of salt mixed with soil.

"We all have a little bit of salt. These brothers and sisters also contain the salt," he said.

The pontiff spent time clasping hands with the refugees, listening intently to their stories. He later told them "your tragedy is very difficult, but it has a place in our hearts."

"In the name of all those who have persecuted you, who have harmed you, in the face of the world's indifference, I ask for your forgiveness," Pope Francis told them.

‘Tell the world our story’

In an interview with ucanews.com, the refugees said they told Pope Francis to help them share their stories to the world.

"I have told the pope (that) we want security for our lives, citizenship in Myanmar, justice for the burning of our homes, and the killing of my two uncles," said 37-year old Muhammad Nurullah.

"The pope told me that he would try to help me," said Nurullah who fled to Cox’s Bazar Balukhali refugee camp with his wife and three children in October.

Ahmed Hossen told the pope about life in the refugee camp. The 60-year old man said he fled to Bangladesh with six family members in December last year.

He said Pope Francis assured him that he would help the Rohingya people. "I want that justice be meted out for the killing of our people," Hossen said.

"I told the pope to help us get justice," said Foyez Ali Majhi whose village in Myanmar was razed to the ground by soldiers.

Abul Syed, another refugee, said he asked the pope to help them have their identity as Rohingya back.

"Rohingya" simply means "inhabitant of Rohang," the early Muslim name for Arakan. The government and military — along with many Myanmar citizens — instead refer to the Rohingya, who number up to 1.1 million, as "Bengalis" implying that the minority group are instead illegal immigrants from neighboring Bangladesh. This is done even though vast numbers of the Rohingya have lived in Myanmar for at least several decades.

"We want our nationality," said Abul Syed, adding that without their identity they will always be in danger. He said they also want Myanmar to ensure the safe return of all refugees.

"The pope listened to us and he said he would talk about our demands," said Syed.

A young Rohingya woman said she does not know if Pope Francis would be able to help them, adding that many people have already talked to them but "we continue to suffer every day."

The pontiff urged religious leaders present at the gathering to keep helping the Rohingya people and "show the world what its selfishness is doing to the image of God."

"Let's continue working so their rights are recognized. Let's not close our hearts. Let's not look away," he said.

In his prepared speech during the interfaith meeting, the pontiff called on the religious leaders "to reach out to others" to promote respect for human rights and peace.

He said interreligious dialogue "challenges us to reach out to others in mutual trust and understanding" to be able to build "a unity that sees diversity not as a threat."

"Openness of heart is likewise a path that leads to the pursuit of goodness, justice and solidarity. It leads to seeking the good of our neighbors," said the pope.

He said religious concern for the welfare of others can "quench the dry and parched wastelands of hatred, corruption, poverty and violence that so damage human lives (and) tear families apart."

Farid Uddin Masud, a Muslim religious leader, praised Pope Francis for speaking on behalf of "the oppressed, irrespective of religion, caste and nationality."

In a meeting earlier with Catholic bishops, the pontiff said the church's "option for the poor" is a sign of God's love and mercy.

"The inspiration for your works of assistance to the needy must always be that pastoral charity which is quick to recognize human woundedness and to respond with generosity," he said.

An estimated 620,000 Rohingya refugees have fled to Bangladesh in recent months following the burning of villages, killings, and rape of women in Myanmar’s Rakhine State. 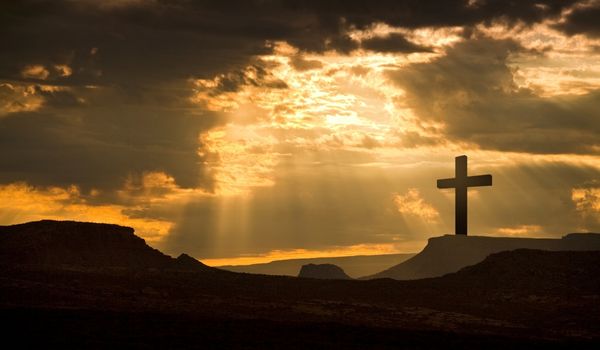