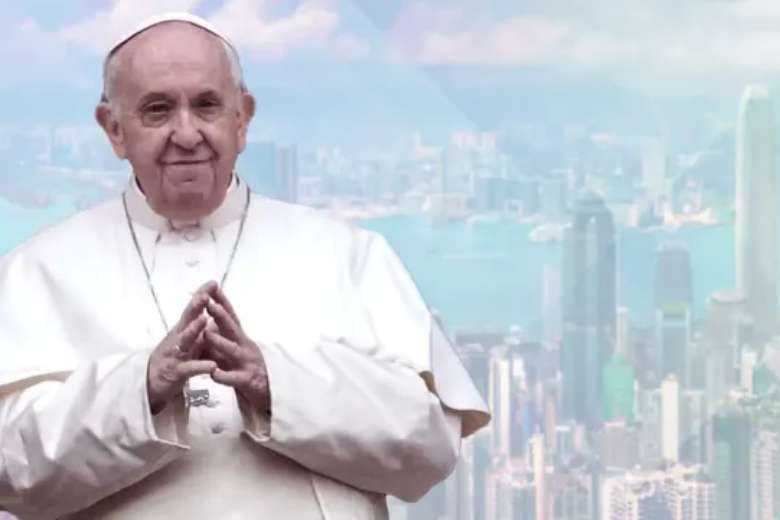 During a meeting with Bishop Stephen Chow Sau-yan of Hong Kong, Pope Francis imparted his special blessings for the Church in China and Hong Kong as the Covid-19 pandemic worsens.

The pope in his two separate video messages in Italian thanked the testimony of people's faith.

"Thanks for the love to the Lord Jesus Christ and the Holy Mother of God, Our Lady. Thank you for your work; for bearing so much with this Covid pandemic makes us suffer a lot,” the 85-year-old pontiff said in his message to China.

“We go forward with the Lord, sometimes the Lord is hidden from our sight, but He is always beside us. It takes patience to hope. I am close to you; I love you so much! I pray for you, and you, please pray for me!” he added.

The pope also sent his blessing to Hong Kong.

“I wish you are good citizens that you are courageous in the face of the challenges of time!,” Pope Franics said in the message to Hong Kong.

The message comes when the city battles the worst bout of Covid-19 as seen at the height of the pandemic in Western cities in 2020. The city has crossed over one million infections and 6,360 deaths, mostly in recent weeks.

Meanwhile, some media outlets such as US-based Catholic site The Pillar speculated that Bishop Chow’s visit to the Vatican, his first after his ordination as the bishop of the politically troubled city, was not merely an unofficial courtesy call but had added significance.

The visit came about a month after the Vatican pulled out its diplomats from Hong Kong and Taiwan.

Monsignor Javier Herrera Corona, the Holy See's representative in Hong Kong, was transferred as apostolic nuncio to Congo on Feb. 5. Days later, the Vatican announced the transfer of its Taiwan representative Monsignor Araldo Catalan to Rwanda. The posts remain vacant to date.

The withdrawal of Vatican representatives from Taiwan and Hong Kong, some media reports said, were aimed at strengthening Vatican's ties with China. But the Vatican dismissed such reports are mere rumors.

Bishop Chow's meetings in the Vatican also comes as the China-Vatican temporary deal is due for renewal in October this year. The experimental agreement on the appointments of bishops in China was first signed in  September 2018 and was renewed in 2020 for another two years. It expires in October.

The agreement, whose provisions have not been made public, allows the Chinese government to have a say on appointments of bishops in the Catholic Church, comprised of an estimated 10 million Catholics who are divided into two camps — the state-aligned church and underground church.

Despite the deal being signed nearly four years ago, dozens of Catholic dioceses in China remain without bishops, allegedly over disagreements between the Vatican and the CCP over the candidates

The agreement triggered strong criticism from some church leaders who called it “a betrayal” of Catholics who suffered the tyranny of the Chinese Communist Party (CCP).

The critics also slammed the Vatican for allowing the communist regime to call the shots in bishop appointments when it is accused of the genocide of Uyghur Muslims and intensifying its crackdown on Christian individuals, leaders and institutes for refusing to register with the state-run church.

Despite the deal being signed nearly four years ago, dozens of Catholic dioceses in China remain without bishops, allegedly over disagreements between the Vatican and the CCP over the candidates.

For example, Father Chow became Hong Kong bishop more than two years after the seat was vacant reportedly because of the Vatican’s diplomatic sensitivities with China.