Covid-19 crisis is exposing the hypocrisy of politicians who speak of hunger but manufacture weapons, he says 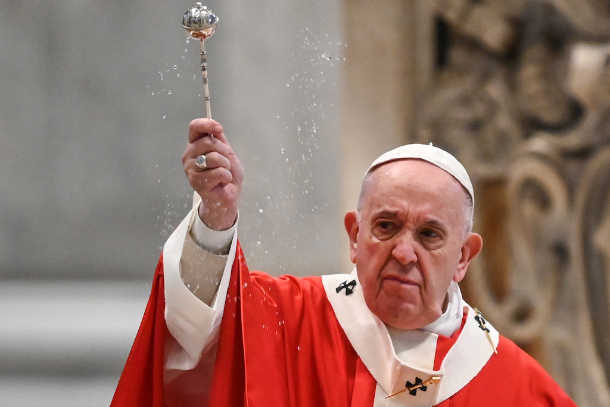 Pope Francis blesses attendees as he celebrates Palm Sunday behind closed doors in St. Peter's Basilica on April 5 in the Vatican during a lockdown aimed at curbing the spread of Covid-19. (Photo: Alberto Pizzoli/AFP)

Pope Francis has accused some European leaders of embracing Hitler-style populism as the world tackles the Covid-19 pandemic.

The 83-year-old bishop of Rome made the controversial comments in an interview with UK-based Catholic weekly The Tablet.

Speaking as Christians around the world prepare to celebrate Easter, the pope said: “At this time in Europe when we are beginning to hear populist speeches and witness political decisions of this selective kind, it’s all too easy to remember Hitler’s speeches in 1933, which were not so different from some of the speeches of a few European politicians now.”

He added: “This crisis is affecting us all, rich and poor alike, and putting a spotlight on hypocrisy. I am worried by the hypocrisy of certain political personalities who speak of facing up to the crisis, of the problem of hunger in the world, but who in the meantime manufacture weapons. This is a time to be converted from this kind of functional hypocrisy. It’s a time for integrity. Either we are coherent with our beliefs or we lose everything."

Speaking to media on board the papal plane on his return from a trip to Madagascar, Mauritius and Mozambique last September, he said he had been unfairly labeled a communist by his critics, particularly conservative Catholics in the United States.

“It’s as if they want to return to the past in Europe,” he said, adding that xenophobia is “a human disease, like measles.”

In his interview with The Tablet, the pope said the current crisis offers a reminder to remember the poor.

“This is the moment to see the poor. Jesus says we will have the poor with us always, and it’s true. They are a reality we cannot deny. But the poor are hidden because poverty is bashful,” he said.

“St. Teresa of Calcutta saw them and had the courage to embark on a journey of conversion. To see the poor means to restore their humanity. They are not things, not garbage; they are people. We can’t settle for a welfare policy such as we have for rescued animals. We often treat the poor like rescued animals. We can’t settle for a partial welfare policy.”

Pope Francis used the interview with papal biographer Austen Ivereigh to offer a message of hope that the pandemic can bring positive changes.

“Every crisis contains both danger and opportunity: the opportunity to move out from the danger. Today I believe we have to slow down our rate of production and consumption (Laudato si’, 191) and to learn to understand and contemplate the natural world. We need to reconnect with our real surroundings. This is the opportunity for conversion,” he said.

“Yes, I see early signs of an economy that is less liquid, more human. But let us not lose our memory once all this is past, let us not file it away and go back to where we were. This is the time to take the decisive step, to move from using and misusing nature to contemplating it. We have lost the contemplative dimension; we have to get it back at this time.”

He said the Catholic Church will come out of the Covid-19 crisis with its institutions reconfigured according to the spirit of early Christianity and less attached to "certain ways" of thinking.

“We have to learn to live in a Church that exists in the tension between harmony and disorder provoked by the Holy Spirit. If you ask me which book of theology can best help you understand this, it would be the Acts of the Apostles. There you will see how the Holy Spirit de-institutionalizes what is no longer of use and institutionalizes the future of the Church. That is the Church that needs to come out of the crisis.”