Well-wishers from the furthest corners of the country, as well as overseas, lined the streets for the pontiff's arrival Pope Francis is greeted by children upon his arrival at the Yangon International Airport on Nov. 27. Pope Francis arrived in Myanmar at the start of a highly sensitive four-day trip to a country facing global condemnation over its treatment of Rohingya Muslims. (Photo by Vincenzo Pinto/AFP)

Thousands of excited Catholics and well-wishers gathered on the streets of Yangon as Pope Francis' plane touched down Nov. 27 for the most politically controversial trip of his papacy.

The immediate fear of the trip-organizers was not related to the pontiff's possible use of the controversial term 'Rohingya,' but had instead refocused on multiple open-air public events scheduled for his three-and-a-half day visit.

"Our biggest concern now is the security of the Holy Father," said Father Mariano Soe Naing, the Myanmar Bishop's Conference spokesman for the papal trip, while not expanding further.

More than 7,000 ethnic Kachin from the conflict-torn state in northern Myanmar traveled down to welcome the pope in Yangon. People in Kachin traditional dress sang songs and danced while others shouted "Papa Francis" and wished the pontiff good health as his motorcade passed along the streets.

The pope will lead a public Mass at Kyaikkansan sports ground in Yangon on Nov. 29 where more than 150,000 Catholics and people from other religions are expected to join.

Moses U Kyar, from the ethnic Kayah tribe in Taunggyi Diocese, said the first visit by a pope to a poor country like Myanmar is a special blessing and will give strength to minority Catholics.

He added that the papal visit came due to the political openness of Myanmar which is part of the nation's moving forward to full democracy.

"His motto is love and peace so he will surely talk about peace," U Kyar, a government schoolteacher, told ucanews.com.

Sister Bambina, a nun from St. Joseph of the Apparition congregation in Yangon, said she was so excited over the pope's visit that she can't express how joyful she feels.

"The visit will bring peace and prosperity to the country and it will deepen our faith," Bambina told ucanews.com. Pope to meet general in charge of Rohingya clearance operations 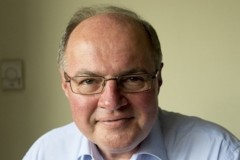 Thousands of Catholics and Buddhists packed the street near St. Mary's Cathedral to catch a glimpse of the pope's motorcade.

John Hong Khong, 59, a catechist from Myitkyina, Kachin, said it is a special privilege for the people of Myanmar to have the pope visit the country.

"Our greatest expectation is to get peace through the pope's visit as we believe he will raise peace issues and push the country's leaders for ending ethnic conflicts," Hong Khong told ucanews.com.

Myanmar is reeling from decades of ethnic conflicts and fighting is still raging in Kachin and northern Shan States between local armies and the military.

But despite the decades of internal strife, it is the recent exodus of more than 620,000 Muslim Rohingya people from northern Rakhine State and what the pope decides to publicly say about them that has grabbed the world's attention.

Myanmar's first and only cardinal, Cardinal Charles Maung Bo of Yangon, has warned the pope that using the term Rohingya, may trigger violence in the majority Buddhist country. The Rohingya, who have fled to Bangladesh following a Myanmar military crackdown, are not officially recognized as one of the country's 135 separate ethnic groups and are commonly referred to as Bengali.

Aung San Suu Kyi has been criticized for her failure to speak out in support of the Rohingya, but she has no control over the military under the 2008 Constitution.

Pope Francis has already used the term Rohingya twice when offering prayers for their plight.

The news of the visit has already drawn ire from Buddhist nationalists as they said that his visit was politically instigated.