The appointment, which has raised eyebrows because of his young age, was announced by Archbishop Sinaga on Dec. 8 during a Mass in Medan Cathedral Church.

Even though he has retired, Archbishop Sinaga, 77, is currently serving as apostolic administrator of Sibolga Diocese following the death of Capuchin Bishop Ludovicus Manullang in September.

He attended Christus Sacerdos Minor Seminary in Pematangsiantar before being ordained as a priest on Dec. 11, 1999, and serving as parish priest of Our Lady of the Assumption in Kabanjahe.

In 2002, he studied dogmatic theology at Gregoriana University in Rome.

Since 2005, he has served as a lecturer in various theological disciplines at St. John's School of Philosophy and Theology in Pematangsiantar.

He was elected Capuchin provincial superior in 2015 and was re-elected this year for a second term until 2021.

Capuchin Father Chrispinus Silalahi, principal of Christus Sacerdos Minor Seminary in Pematangsiantar and chairman of the Catholic Education Council in Medan Archdiocese, said Father Sipayung’s appointment as archbishop was exciting, but he also expressed surprise as he is still young. 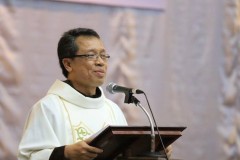 "For me, the ideal age to become a bishop is 55 or above, a time when someone has become more mature,” he said.

However, it seems that Pope Francis deliberately chose the young priest so that he could better embrace the younger generation and manage church affairs through the adoption of modern management.

Medan Archdiocese has about 532,000 Catholics from several ethnic groups, including the Batak.