Pope Francis and the Vatican Spring

This week he showed that people matter more than itineraries 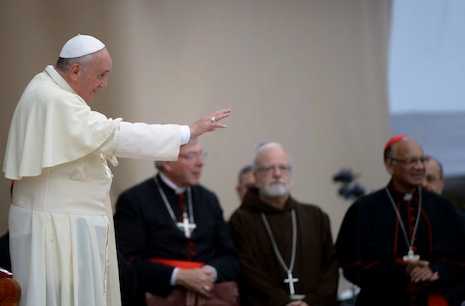 By Paul Vallely for The Independent

It ought to have been, for Pope Francis, a day of happiness. It was the first visit of his life to Assisi, the home of the saint whose name the new pontiff chose as a kind of mission statement. But the news came in that as many as 300 migrants were feared dead after the sinking of an overloaded boat off the coast of the southern island of Lampedusa. “Today is a day for crying,” he said instead.

Yet that was apt too. Lampedusa, the first European port of overcrowded call for many people fleeing poverty and war in Africa, was the first place to which Francis travelled outside Rome as Pope. The great saint of Assisi, who cast off a pampered life as the son of a rich merchant to live among the destitute, may be the great exemplar of embraced poverty. But it is in places like Lampedusa that the reality of involuntary poverty in this globalised world is made manifest.

As Pope Francis showed, however, you do not have to travel far to encounter the marginalised. At the Serafico Institute, a charity for seriously disabled children, the Pope stopped to greet every child – more than 100 individuals — kissing some, bending to hear a whispered greeting, embracing those unable to speak. By the time he left this first appointment he was already 45 minutes behind schedule. Itineraries do not matter so much as people, was the implied message.

He was more overt when he entered the room where St Francis had stripped himself of his rich clothes to embrace a life of poverty. The local archbishop asked the Pope to say the Lord’s Prayer there, as St Francis had done eight centuries before. “The Our Father?” the Pope replied. “But I want to talk about what the Church today need to strip away to emulate the gesture Francis made.”

Such myth-making is part of the Jesuit pontiff’s spiritual armoury. He has struck the world as a different kind of Pope precisely because he practices what he preaches. The figure on the cross in Assisi’s Church of San Damiano – which reputedly spoke to St Francis telling him to rebuild the ruined church 800 years ago – was one, the Pope noted, on which Jesus is depicted not as dead, but alive, his eyes open to a world in which we all need to live more simply. Francis has embraced that by shunning his gold-leafed papal palace for the spartan quarters of a Vatican guest house.

As a measure of his intent to turn the Church upside down the Pope took with him the eight cardinals with whom he had spent the past three days in a closed meeting with no Vatican officials present. It was the first gathering of a radical new body Francis has set up to act as a counterweight to the bureaucrats who form the Church’s governing Curia.

The chosen eight have all in the past been strong critics of the way Rome has acted as the master of local churches around the world rather than their servant. This week they began work on a radical reform of the scandal-hit Vatican. But they are also looking at how to give a greater role to lay people, to women, to divorced and remarried Catholics – who have traditionally been marginalised – and to ensure that the Church prioritises the poor. They have discussed setting up church courts all around the world to deal with paedophile priests more swiftly and severely.

They now need to create mechanisms to ensure their changes cannot be overturned by some conservative successor.