Pope finally meets a critic of the China-Vatican deal 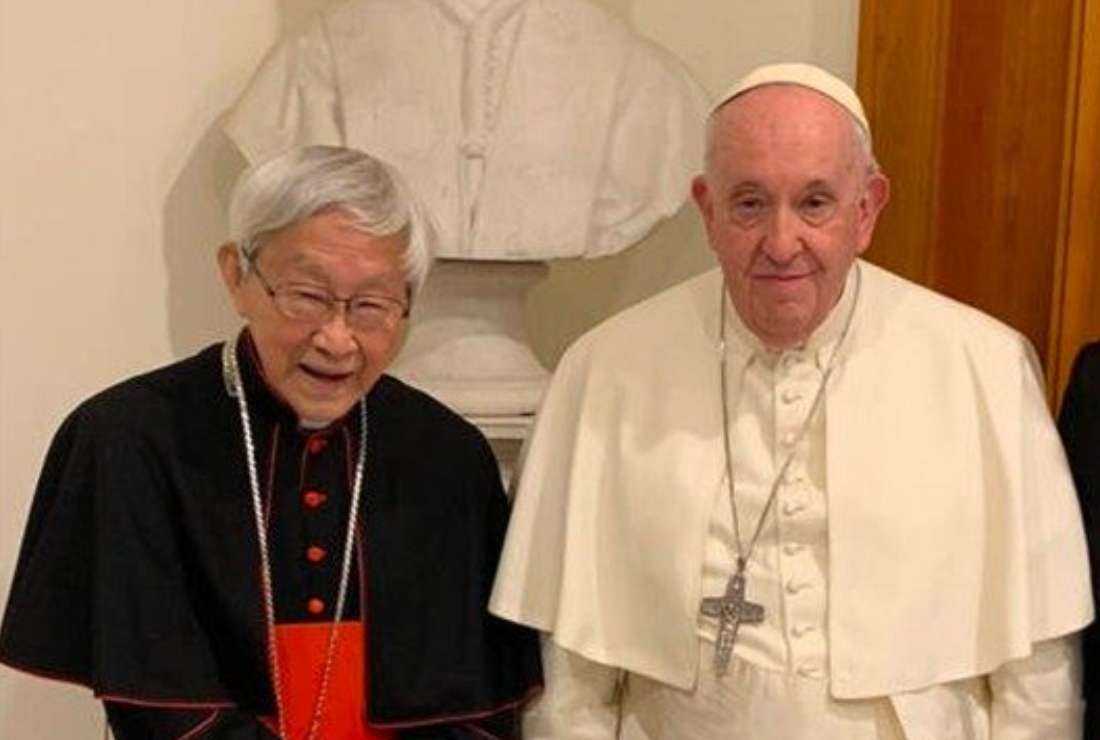 Cardinal Joseph Zen Ze-kiun, 90, may have had to wait almost three years but he finally gained a private audience with Pope Francis, the day after the Jan. 5 funeral for retired Pope Benedict XVI.

“It was wonderful. He was so very warm,” Zen told Jesuit magazine America after the audience.

Zen said he thanked Francis for giving Hong Kong “a good bishop,” by appointing Jesuit Father Stephen Chow in 2021 over the top of other more conservative, pro-China candidates. He said Francis quipped, “He’s a Jesuit!”

He also told the pope about his decade-long pastoral ministry visiting prisoners in Hong Kong’s jails and that he had baptized a number of prisoners when they requested the sacrament.

"Benedict’s death served to open recent wounds over the deal"

Cardinal Zen had previously traveled to Rome in 2020, seeking an audience with Pope Francis after sending him a letter concerning the Vatican’s controversial deal with the Chinese Communist Party regarding the appointment of bishops but did not manage to see him. Pope Benedict’s death served to open recent wounds over the deal.

In 2020, Cardinal Giovanni Battista Re, then newly appointed dean of the College of Cardinals said that Benedict had effectively approved the structure of the deal. Pope Francis has long leaned into the fact that it was Benedict’s 2007 Letter to the Church in China that paved the way for the deal.

“If you want to prove to me that the recently signed agreement was already approved by Benedict XVI, you just have to show me the text of the agreement, which I am barred from seeing till now, and the archival evidence which you say you could verify. Then there remains to be explained why it was not signed at that time,” Cardinal Zen wrote in response to Re.

He then traveled to Rome seeking an audience with Francis on the issue but failed to meet him.

Cardinal Zen has always blamed Vatican Secretary of State Cardinal Petro Parolin, the architect of the deal with Beijing, for Pope Francis’ stance. He has continued to claim that Cardinal Parolin has ‘manipulated’ Pope Francis regarding China.

"He now has a conviction and as such, can be more firmly controlled by the powers that be in Hong Kong"

Due to his various run-ins with the increasingly tough authorities in Hong Kong, Zen had to obtain special permission to travel to Rome this time.

Last November, he was found guilty of failing to register a foreign fund and handed a token fine. He has also been arrested but not yet charged with more serious offenses. But the real import of the trial is that he now has a conviction and as such, can be more firmly controlled by the powers that be in Hong Kong, which are now effectively puppets of their master in Beijing.

In the wake of his visit to Rome, Cardinal Zen published a heartfelt tribute to Pope Benedict in which he dwelt on the late pope’s focus on China.

“As a member of the Chinese Church, I am immensely grateful to Pope Benedict for things he has not done for other Churches. First of all, a letter [June 29, 2007], which was a masterpiece of balance between the lucidity of Catholic ecclesiological doctrine and humble understanding of civil authority. Catholic ecclesiology which is not personal to him, but expounded by him with unsurpassed clarity and concreteness. Unfortunately, a rather worn letter: errors [more likely also manipulations] in the Chinese translation and tendentious quotations against the obvious meaning of the letter,” Zen wrote in Italian on his website.

“Another extraordinary thing he has done for the Church in China is the establishment of a powerful commission to take care of the affairs of the Church in China; unfortunately under the new president of this commission, it was secretly made to disappear without even a word of respectful farewell.

At the end of his meeting with Francis, the pope invited Cardinal Zen to his apartment. Here, he showed the cardinal a copy of the statue of Our Lady of Sheshan that he was given on his election. The original is upon the church at the shrine of Mary in Sheshan, a popular shrine outside Zen’s hometown Shanghai that he fled at the end of the Chinese Civil War in 1948 to enter the Salesian congregation.

“I hope one day, you can see Sheshan,” Cardinal Zen told the pope who has long expressed a desire to visit China.

History, of course, has already proven that Cardinal Zen’s view on the Beijing-Vatican deal was clear-eyed. Beijing has continued to prosecute Catholics who will not join the “official” Church in China which is run and regulated by the Chinese Communist Party (CCP) itself. And in November last year, the Holy See released a statement expressing "surprise and regret" at the installation of Bishop John Peng Weizhao as auxiliary bishop of Jiangxi, a diocese not currently recognized by the Vatican, an appointment made without consulting the Holy See.

But how much that will test Francis’ resolve on China remains to be seen, and as the prospect of his successor now surely looms, will the deal survive his papacy?

THERESE ROSE
Having lived in Beijing, I was shocked and filled with dread at the Vatican's decision to allow the Chinese gov't to choose. I could easily see the Sacrament of Confession would decline in use with parishioners as anything they say would be used against them with the gov't. It was extremely head shaking and discouraging to see the Vatican in effect, remove it's protection from the Sacraments and parishioners by allowing spies in the Church. Shame on the Pope for not being able to decern the danger and what it would mean for the Chinese Catholic people in China.
Reply