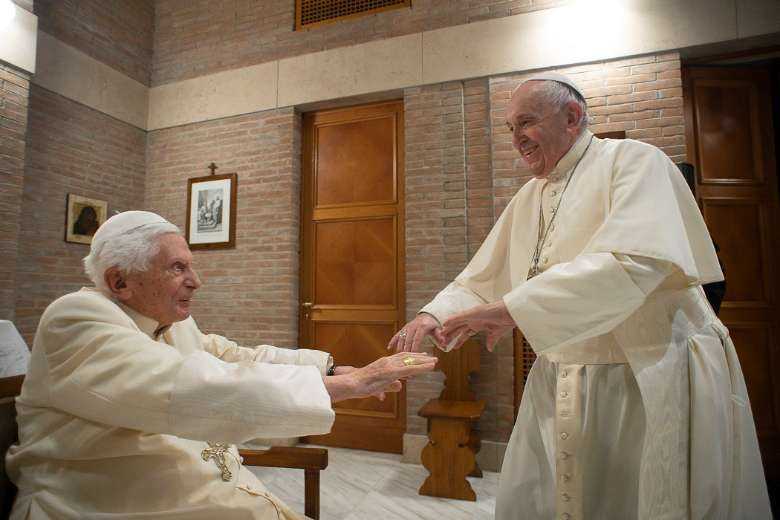 The pontiff who led the Catholic Church for eight years from 2005 to 2013, after the death of St. John Paul II, celebrated his 95th birthday on April 16, Holy Saturday. He was born in 1927 in Bavaria, also on Holy Saturday.

Of the 266 popes, from St. Peter the Apostle to Francis, only 12 have reached the age of 85, including Pope Francis.

Benedict XVI at 95 is the oldest to have been pope, surpassing Pope Leo XIII, who died at 93. This fact is now a significant milestone in Catholic history.

On the eve of his birthday, Pope Francis went to visit Benedict at the Mater Ecclesiae Monastery, the retired German pope’s residence inside the Vatican.

“After a brief and affectionate conversation, and after praying together,” the Holy See press office said, “Pope Francis returned to Casa Santa Marta,” his residence.

Almost at the same time, Massimo Franco, the veteran author who writes for the daily Italian paper Corriere della Sera, released his book titled The Monastery. In this book, Francis referred to Benedict as a “wise grandfather” to whom he occasionally turns for advice, and Benedict treats Francis as his legitimate successor, to whom he pledges loyalty and obedience.

More often than not, Vaticanists and editorialists like Franco are the sort of analysts who overthink and see a rift between Francis and Benedict.

The Monastery is a critical analysis of having two popes, one reigning and one retired, living together in the Vatican.

Almost similar to the movie The Two Popes, produced by Netflix in 2019, the author nevertheless details a prevailing tension at the Vatican over having two popes, a situation he calls an “unprecedented anomaly.”

The Monastery, which refers to the Mater Ecclesiae Monastery, has essentially turned into the symbolic headquarters of the conservatives and traditionalists who do not like the radical and progressive style of Francis, according to the author.

More often than not, Vaticanists and editorialists like Franco are the sort of analysts who overthink and see a rift between Francis and Benedict.

To prove his point, Franco quotes Gerhard Cardinal Mueller as saying that “the monastery is the place where people hurt by Francis go to be healed.”

Cardinal Mueller was replaced in 2017 by Luis Ladaria Cardinal Ferrer as prefect of the Congregation for the Doctrine of the Faith.

Franco insists that, as the Church prizes unity, the situation has created some sort of confusion about who really is the Vicar of Christ or some sort of a specter of a parallel papacy, although he was quick to admit that the nightmare scenario of a “parallel magisterium” as predicted by canon lawyers in 2013 never came about.

In this kind of personal decision, the question of health and mortality seems to come into play, and a mortal man’s desire to be alone with the Immortal God has become a force too strong to resist

One lesson after watching The Two Popes movie is that there is only one pope. The chronology of events tells us that on Feb. 28, 2013, Pope Benedict met with the College of Cardinals in the morning. And in the afternoon he was gone.

He flew by helicopter to the papal summer residence of Castel Gandolfo and stayed there for a while. The next thing we heard was that he transferred to his permanent retirement home, the Mater Ecclesiae Monastery, on May 2, 2013.

It’s not the first time that a Vicar of Christ has resigned. St. Pope Celestine V, a Benedictine monk, was seated in the Chair of Peter for only five months. He reigned, resigned and retired in 1294 to flee Rome and return to his hermitage in the hills of central Italy and Apulia.

In this kind of personal decision, the question of health and mortality seems to come into play, and a mortal man’s desire to be alone with the Immortal God has become a force too strong to resist.

The German pontiff decided to abdicate the papacy, meaning to renounce power when it’s time to renounce it. How shall I put it? His resignation was a forceful message of detachment and simplicity to the world so thirsty for power, money and prestige.

As a retired pope, Benedict allowed others to call him Pope Emeritus rather than revert back to his birth name, but he ceased to wear the red papal shoes and continued to wear the white cassock without the tufted fascia or the pellegrina. Most of all, Benedict discontinued using his official Fisherman’s Ring, ditching any manifestation of a parallel papacy since 2013.

We recall that, on Feb. 28, 2013, in his official farewell address to the College of Cardinals, even before the election of the next pontiff, Benedict XVI proclaimed: “In your midst is the next pope: I promise him obedience.”

By declaring so, Benedict trusted that the papacy, a divine institution, is rooted in the apostolic succession, and that the Holy Spirit is at work until the end of the world.

Cardinal Bergoglio’s election was valid because Benedict’s resignation was valid. Consequently, there is only one pope today — Pope Francis — elected on March 13, two weeks after Benedict resigned in 2013

The retired pope made his first public appearance one year later, on Feb. 22, 2014, to attend the first consistory of his legitimate successor Pope Francis. In that consistory, 19 cardinals were created, including Filipino Archbishop Orlando Quevedo, OMI, of Cotabato.

Cardinal Bergoglio’s election was valid because Benedict’s resignation was valid. Consequently, there is only one pope today — Pope Francis — elected on March 13, two weeks after Benedict resigned in 2013.

The Netflix film is historically correct on that particular aspect. Benedict and Francis are The Two Popes in succession, which makes the Annuario Pontificio equally correct.

So, how’s the pope emeritus doing at age 95? Benedict is slowing down. On the other hand, in spite of a bad knee and sciatica attacks that make walking painful, the Jesuit pontiff at 85 keeps a grueling travel schedule for 2022 and has shown no indication that he plans to slow down.

In 2018, when Benedict wrote a letter in the Italian newspaper Corriere della Sera, he capitalized the word “Casa” to refer to his heavenly home. Sono in pellegrinaggio verso Casa. “I am on a pilgrimage toward Home,” he said.

* Jose Mario Bautista Maximiano is the author of MDXXI: 500 YEARS ROMAN CATHOLIC (Claretian, 2020) and THE CHURCH CAN HANDLE THE TRUTH (Claretian, 2017). The views expressed in this article are those of the author and do not necessarily reflect the official editorial position of UCA News.