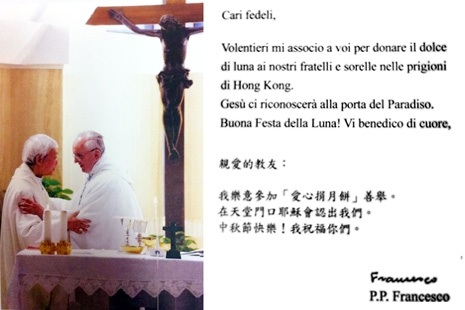 Pope Francis’s response to a request for a symbolic mooncake donation to prisoners in Hong Kong has generated excitement and a flood of cash donations since it was published last week.

Cardinal Zen of Hong Kong issued the request in August because the new pope was well known for his charity and regard for the poor as Cardinal of Argentina, “so I guessed he would also be interested in donating mooncakes to prisoners here”, Zen said.

Mooncakes are a traditional pastry eaten during the commemoration of one of China’s principal traditional festivals, which falls this year on September 19, and Cardinal Zen has for the last three years headed an effort to distribute the cakes to prisoners in jails throughout Hong Kong.

Shortly after issuing his request, Pope Francis sent a card on which he wrote in Italian: Dear Faithful, I gladly join with you to donate mooncakes to our brothers and sisters in the prisons of Hong Kong. Jesus wilil recognize us at the door of Heaven. Happy Moon Festival! I cordially bless you, PP Francesco.

Cardinal Zen translated the message and printed it on the back of a photo taken in June when he concelebrated Mass with the pope at Casa Santa Marta. The cards have been issued to every mooncake donor.

Volunteers have been enlisted to deliver the mooncakes to the government’s distribution station to be sent out to all the 23 prisons, correctional facilities, rehabilitation centers and addiction treatment centers in Hong Kong ahead of the festival.