The pope invited priests, citizens, institutions and organizations to donate to the fund named Jesus the Divine Worker 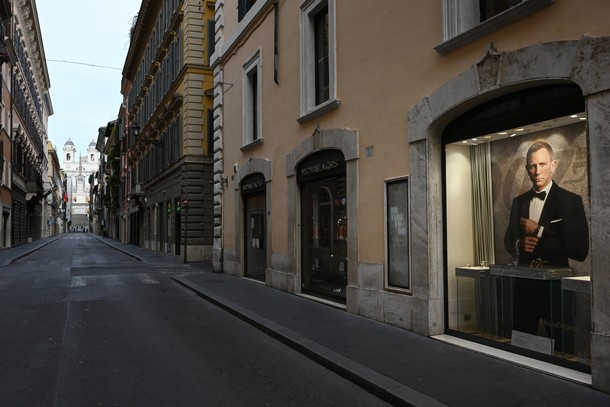 A view shows a deserted Via dei Condotti luxury shopping street in central Rome on March 12, 2020, as Italy shut all stores except for pharmacies and food shops in a desperate bid to halt the spread of a coronavirus. (Photo: Alberto PIZZOLI/AFP)

With so many people left unemployed or in a precarious position because of the COVID-19 pandemic, Pope Francis launched a fund aimed specifically at helping people in Rome struggling economically in the wake of the crisis.

"This fund is meant to be a sign that can urge people of goodwill to offer a concrete gesture of inclusion, especially toward those who are seeking comfort, hope and a recognition of their rights" and dignity as workers, wrote the pope, who is the bishop of Rome.

The pope invited priests, citizens, institutions and organizations to donate to the fund, called "Gesu Divino Lavoratore" ("Jesus the Divine Worker") and he announced he had made an initial allocation of 1 million euro ($1.12 million) to the Rome diocesan Caritas.

The project was announced June 9 by the Vicariate of Rome.

Cardinal Angelo De Donatis, the papal vicar for Rome, said the initiative was just the latest sign of the pope's loving care and concern for the people of Rome. The cardinal said in a press release June 9 he hoped everyone would do their part and come together to renew the city and create "a real and genuine alliance for Rome."

In a letter to Cardinal De Donatis, the pope said he was aware of how the pandemic has led to ongoing pain, sorrow and suffering, "seriously undermining the social fabric of our city."

So many people have shown great generosity and solidarity from the beginning of the pandemic, he said, but it has not been enough.

Government institutions, community leaders and groups representing businesses and workers are all called to listen to the desire of many citizens to work together for the common good "and to transform it into policies and concrete action for the good of the city," the pope wrote.

"I care greatly about protecting the dignity of people who have been hit the hardest by the effects of this pandemic, especially those who risk remaining excluded" from government programs or other formal channels of support and, therefore, require some kind of support so they can get back on their feet, he wrote.

"My thoughts also go to the great multitudes of day laborers and transient workers, those with contracts that have not been renewed, those paid by the hour, interns, domestic workers, small-business owners, self-employed workers, especially those in the hardest hit industries" and connected enterprises, he wrote.

Many of these people are mothers and fathers struggling to put food on the table for their children and to provide just the bare necessities, he added.

Pope Francis invited all of the priests in the diocese to be the first to contribute to the fund and to be "enthusiastic supporters" of the need for sharing, beyond just what is easy to part with, in their community.

"I would like to see blossom in our city the solidarity of the person next door," he said, and an attitude reflecting the spirit of a "sabbatical" or "sabbath" year in the Old Testament -- when debts were forgiven and disputes ended -- and by asking for payment according to what the borrower can manage, not what the market demands.