"You're mothers, not spinsters," he says in warm and cordial meeting 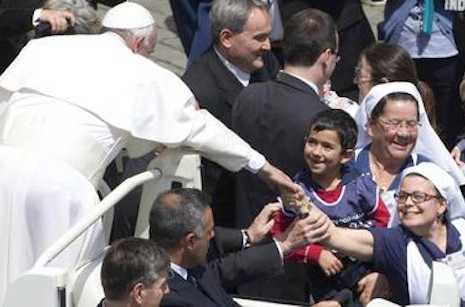 During today’s cordial meeting between the Pope and nuns from across the world, held at quite an unusual time, Francis reminded women religious that they cannot serve Jesus without feeling that they belong to the Church. Before today’s General Audience, Pope Francis met approximately 800 representatives of the International Union of Superiors General (UISG) in the Paul VI hall. The women religious are currently in Rome, attending their plenary assembly.

The nuns had been very eager to attend the audience in light of the difficult phase they have been going through in recent years. Not only has the slump in vocations continued but the average age of nuns has increased and last year the Vatican placed the Leadership Conference of Religious Women, the largest body representing U.S. nuns, under the administration of an external commissioner. This sparked concern and dismay among the public and the American Catholic Church.

In recent days, the Prefect of the Congregation for Religious Life, Cardinal João Braz de Aviz, told the LCWR he was disappointed by the way in which the inquiry had been conducted, with his dicastery being left in the dark until the last minute. His words had such widespread resonance that the Vatican Press Office was forced to clarify that the cardinal did not intend to suggest there were any differences between the Congregation for Religious and the Congregation for the Doctrine of the Faith, which headed the inquiry. Today, Pope Francis confirmed his support for Cardinal Braz de Aviz, calling him “dear brother” and for the UISG’s decision to address the subject of Church authority in their plenary assembly.

The Pope described obedience as “listening to God's will in the interior motion of the Holy Spirit authenticated by the Church, accepting that obedience also passes through human mediations.” In more general terms, he reminded those present that the relationship between authority and obedience is to be seen “within the broadest context of the Church ministry and plays a part in the Church’s role as a mediator.”

Essentially, whoever has authority within the Church and the religious orders must translate this authority into “service”. “You should always be supportive, understanding, helpful and loving when exercising your authority, embracing everyone, especially those who feel lonely, excluded and desolate; all feelings these feelings are on the existential margins of the human heart” Pope Francis advised nuns.

The Pope also talked about the vow of chastity taken by women religious: this chastity must be ‘fertile’ because “the consecrated are mothers: they must be mothers and not 'spinsters'!” Finally, in a comment that could have been a reference to the controversy caused by the inquiry into the LCWR but was also laden with words and themes from St. Ignatius’ Spiritual Exercises (St. Ignatius being the founder of the Jesuits), the Pope said that for religious, a strong sense of belonging to the Church is “is a constitutive part” of their lives. “It isn't possible that a consecrated woman or man might 'feel' themselves not to be with the Church,” the Pope said.

The Pope reminded those who justify disobedience to Church orders that it “is an absurd dichotomy to think of living with Jesus but without the Church.” “Feel the responsibility that you have of caring for the formation of your Institutes in sound Church doctrine, in love of the Church, and in an ecclesial spirit,” he added. “Rejoice, because following Jesus is a wonderful thing, it is a wonderful thing to become a living example of the Virgin Mary and our hierarchical Holy Mother Church,” Pope Francis concluded.