The pope has said he is quite comfortable in the shared Catholic guesthouse he has used since arriving for the Conclave. 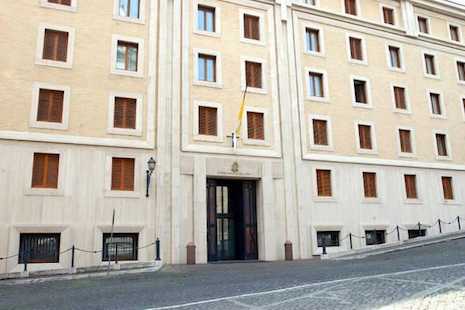 The papal apartment on the third floor of the Apostolic Palace is ready after the quick maintenance work that was needed to get it back to new after Benedict XVI’s eight year papacy. But Pope Francis is not moving in yet, at least not for now or the foreseeable future, Argentinian daily La Nación wrote this morning.

The Argentinian Pope will continue living in the Vatican guesthouse, the Domus Sancta Marthae (St. Martha’s House), “until further notice, the Vatican spokesman, Fr. Federico Lombardi announced this morning. St. Martha’s House is where cardinals stay during the Conclave and is the residence of about a dozen priests and bishops who serve inside the Vatican. The other rooms are free for bishops and cardinals to use when they come to Rome for audiences and meetings.

The Pope “is experimenting with this type of living arrangement, which is simple,” but allows him “to live in community” with priests and bishops, Fr. Lombardi explained. By staying at St. Martha’s, Francis will be able to live “together with other members of the clergy,” avoiding the luxurious isolation of the papal apartment.

Bergoglio celebrated his customary morning mass at 7 am in the chapel of St. Martha’s House, this time with the guesthouse’s permanent residents, who were finally able to return to their rooms after the Conclave. Lombardi confirmed that in his homily, Francis gave the impression he intended to stay with them for some time.”

The Pope moved into suite number 201 – complete with a sitting room for receiving guests - a day or so ago. The new Pope was meant to stay in the suite in the period just after his election. Francis had previously been staying in room 207 and chose to stay there even in the days just after the Conclave.

Lombardi emphasised that Bergoglio has started using the papal apartment reserved for audiences with important visitors, such as heads of state (on the second floor of the Apostolic Palace) on a regular basis. The spokesman also explained that Francis will continue to recite the Angelus form the window of the Pope’s private apartment on the third floor.

Pope Bergoglio’s fondness for community life in St. Martha’s House is quite obvious to everyone. The chance of meeting people, sitting down for meals with them, sharing parts of his day with the other residents and celebrating mass in a chapel that is able to hold a good number of people: all these reasons contributed to Francis’ decision to stay, which he communicated to the other guests of St. Martha’s House, first of all to the fifty priests and monsignors who work in the Roman Curia and were able to return to their rooms following the Conclave.

The Pope will no longer live isolated in the papal apartment. Although he is using the apartment reserved for important visits and that which is usually used by Popes for the Sunday Angelus prayer, “the Apartment” intended as the group of individuals that is closest to the Pope and lives with him, as referred to by the Curia and journalists, will no longer exist under Francis.

Bergoglio has essentially chosen normality. A normality and approachability that has struck representatives of other Christian denominations in recent days, particularly the Orthodox delegations representing the Patriarchates of Constantinople and Moscow, who were glad to have had the opportunity to sit down to table with the Pope.

Vatican Insider has learnt that there was an objection to the Pope’s decision to stay in St. Martha’s and that is that Curia priests were meant to return to their rooms and if Francis stayed there he would have direct contact with hem. Bergoglio apparently replied: “I am used to being with my priests.” In any case, the Pope’s decision is not surprising: Bergoglio was used to living in a single room in the archbishop’s palace in Buenos Aires.