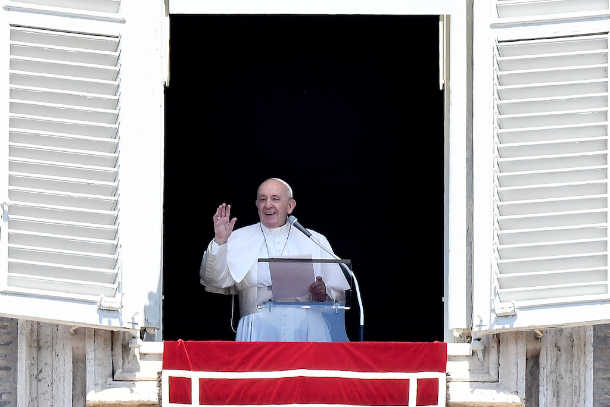 Pope Francis waves to pilgrims from his studio window overlooking St. Peter's Square at the Vatican during his Sunday Angelus prayer on Aug. 11. (Photo by Filippo Monteforte/AFP)

Marking the anniversary of the Geneva Conventions, Pope Francis urged nations to recall the need to protect the life and dignity of the victims of war and armed conflict.

"Everyone is required to observe the limits imposed by international humanitarian law, protecting unarmed populations and civil structures, especially hospitals, schools, places of worship, refugee camps," he said after praying the Angelus with visitors gathered in St. Peter's Square at the Vatican on Aug. 11.

The pope reminded people that Aug. 12 marked the 70th anniversary of the Geneva Conventions, which, he said, were "important international legal instruments that impose limits on the use of force and are aimed at protecting civilians and prisoners in time of war."

"May this anniversary make states increasingly aware of the indispensable need to protect the life and dignity of victims of armed conflicts," he said.

"And let us not forget that war and terrorism are always a serious loss for all of humanity. They are the great human defeat!"

The Geneva Conventions of 1949 expanded previous international agreements for the humane treatment of military personnel who were wounded or captured, medical personnel and civilians, by including rules protecting prisoners of war from torture and mistreatment, and providing them with suitable housing, sustenance and oversight by the International Red Cross.

New articles also called for protecting wounded, sick and pregnant civilians as well as mothers and children. Civilians should have access to adequate medical care and must not be collectively deported or made to work by occupying forces without pay.