Pope Francis greets the crowd at the end of a weekly general audience at St. Peter's Square on May 31 at the Vatican. (Photo by Tiziana Fabi/AFP)

Christians are called to be "sowers of hope," consoling and defending the poor and anyone in need, Pope Francis said.

As Christians prepared to celebrate Pentecost June 4, Pope Francis used his weekly general audience May 31 to speak about the power of the Holy Spirit to strengthen the hope of believers and to send them forth to instill hope in others.

Sowing bitterness or perplexity, he said, "isn't Christian and if you do this, you aren't Christian. Sow hope. Spread the oil of hope, diffuse the perfume of hope and not the vinegar of bitterness and hopelessness," Catholic News Service reported the pope as saying.

Having an abundance of hope, Pope Francis said, means not only hoping that when life is over one will be with God. It also means having the strength today to continue hoping "even when there is less human reason for hoping."

"Hope truly is like a sail," the pope said. "It gathers the wind of the Spirit and transforms it into a driving force that pushes the boat out to sea or to the shore, depending on circumstances."

"It pushes us to go forward, always forward," he said. The Holy Spirit "makes us feel like pilgrims and strangers and does not allow us to sit back and become a sedentary people."

Jesus promised his disciples the Holy Spirit as a "paraclete," a provider of consolation and a defense, the pope said, and those who have been blessed with the gifts of the Holy Spirit are in turn called to console and defend others. 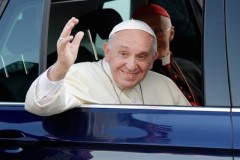