Pope calls for peace in Korea 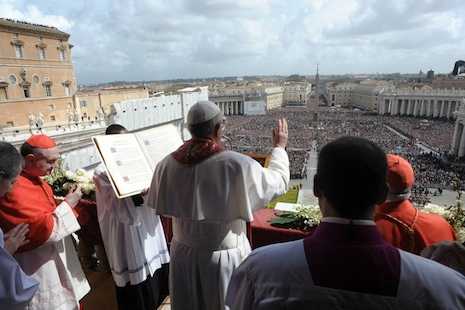 Pope Francis prayed for a "political solution" in Syria and for "reconciliation" on the Korean peninsula in his first Easter Sunday message in front of a crowd in St Peter's Square.

Latin America's first pontiff also issued an appeal for hostages held by militants in Nigeria and condemned human trafficking as "the most extensive form of slavery in this 21st century".

The pope delivered his "Urbi et Orbi" blessing to Rome and the world from the same balcony of St Peter's Basilica where he made his first appearance after his momentous election to the papacy on March 13.

Speaking in front of some 250,000 people from around the world in the Vatican, Francis prayed for "dear Syria, for its people torn by conflict and for the many refugees who await help and comfort".

"How much blood has been shed! And how much suffering must there still be before a political solution to the crisis will be found?" he said.

As he delivered his message, violence still raged in Syria, where Easter Sunday fighting killed at least 140 people including 56 civilians and engulfing areas in and around Damascus and sparking a mass exodus from a badly hit district in the northern city of Aleppo, a watchdog group said.

"On the Korean peninsula, may disagreements be overcome and a renewed spirit of reconciliation grow," Francis said, as North Korea vowed to strengthen its nuclear weapons a day after declaring it was in a "state of war" with South Korea.

Francis also prayed for Nigeria, "where great numbers of people, including children, are held hostage by terrorist groups", an apparent reference to a French family kidnapped in Cameroon and believed held by radical Nigerian Islamist group Boko Haram.

The pope also toured St Peter's Square in his open-top "popemobile" kissing babies and waving to cheering crowds who waved flags from around the world, including his native Argentina.

Easter is the holiest day in the Christian calendar and celebrates the belief in Jesus Christ's death and resurrection. It is the culmination of weeks of intense prayer for Christians.

The Latin Patriarch of Jerusalem on Sunday invited the pope and the world's Christians to visit the Holy City, which he called the birthplace of "everything Christian".

"Our new evangelisation, in order to be up-to-date and effective, must start out again from Jerusalem, start out from the first Christian community," Fuad Twal, the senior Roman Catholic cleric in the Holy Land, said in his Easter homily.

In his first Easter sermon as archbishop of Canterbury, who leads the world's 80 million Anglicans, Justin Welby warned against "pinning hopes on individuals" to solve all of society's problems.

A "hero leader culture" in which all trust was placed in one person only led to false hope, he told worshippers.

The 76-year-old Pope Francis, formerly Buenos Aires archbishop Jorge Bergoglio, has said he wants a "poor Church for poor people" and has adopted a less formal style than that of his predecessor Benedict XVI.

A moderate conservative on Catholic doctrine, he was known in Argentina for his humble lifestyle, his outreach in poor neighbourhoods and his strong social advocacy during his homeland's devastating economic crisis.

But he faces major challenges ranging from reform of the scandal-ridden Vatican bureaucracy to addressing decades of child abuse by paedophile priests. AFP