Bishops and priests told to be 'nothing more' than shepherds 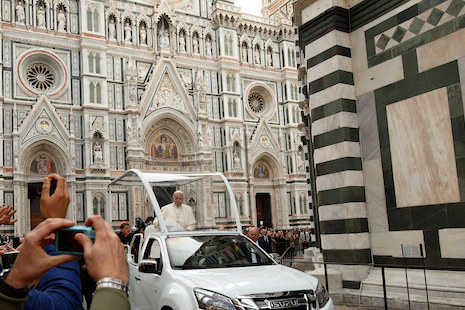 Pope Francis arrives outside the Duomo, the Cathedral of Santa Maria del Fiore, left, on Nov. 10. Pope Francis attended a meeting of Italy's bishops and cardinals in the Duomo during a one-day visit to Florence. (Photo by CNS)

Meeting workers and addressing a major gathering of the Catholic Church in Italy, Pope Francis demanded an end to economic exploitation, to clerics "obsessed" with power, to apathy among youth and to a cold, fearful church that forgets Christ is always by its side.

"These times of ours demand that we experience problems as challenges and not like obstacles: The Lord is active and at work in the world," he said Nov. 10 inside Florence's Cathedral of Santa Maria del Fiore — the third-largest church in Europe.

In a trip that covered a normal 8 a.m.-to-5 p.m. workday, the pope rallied workers, young people and hundreds of church leaders representing the entire Italian peninsula; he met with the sick, kissed babies, admired Renaissance artwork and venerated an ancient relic. He ate lunch with the poor and homeless and celebrated Mass in a city soccer stadium.

Much of the city seemed empty of residents, yet filled with people who came to see the pope and tourists curious about the beefed-up security and roadblocks.

Speaking to hundreds of Italian cardinals, bishops and laypeople attending a national congress held only every 10 years, the pope gave a lengthy, yet clear indication of where their discussions and pastoral mission should be heading.

"We must not tame the power of the face of Jesus," who takes on the face of the humiliated, the enslaved and "the emptied," he said.

A divine Christ reflects a very human gaze of humility and selflessness, and he insists his disciples follow the beatitudes like he did, the pope said.

"We must not be obsessed with power," the pope said, even if it is a useful or seemingly innocuous way of getting things done. Otherwise the church "loses its way, loses its meaning."

He also told priests and bishops to be shepherds, "nothing more. Shepherds."