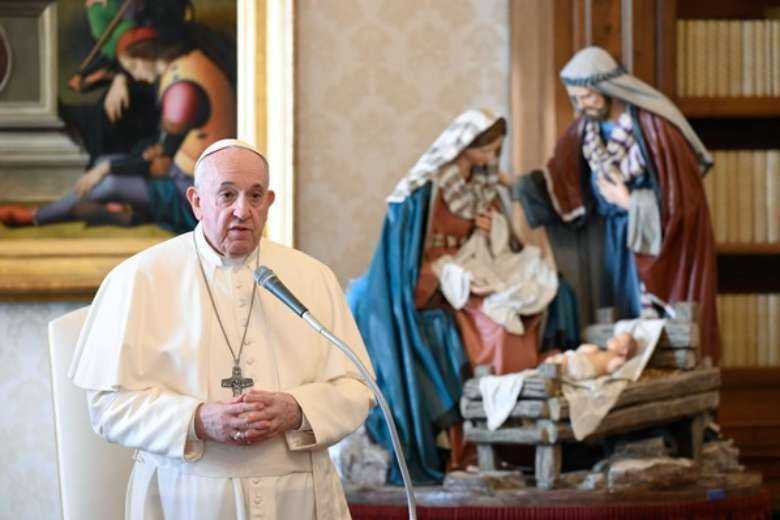 Pope Francis, standing next to a Christmas nativity scene, addresses a livestreamed weekly private audience from the library of the apostolic palace in the Vatican on Dec. 16. (Photo: Vatican Media/AFP)

Appealing for a worldwide commitment to initiating a "culture of care" for one another and for the environment, Pope Francis again called on nations to divert money from their military budgets to create a global fund to end hunger and promote development in the world's poorest nations.

"How many resources are spent on weaponry, especially nuclear weapons, that could be used for more significant priorities such as ensuring the safety of individuals, the promotion of peace and integral human development, the fight against poverty and the provision of health care," he wrote in his message for World Peace Day 2021.

The Catholic Church celebrates World Peace Day Jan. 1; the pope's message, which will be distributed to heads of state and government around the world, was released by the Vatican Dec. 17.

The theme the pope chose for the 2021 celebration was: "A Culture of Care as a Path to Peace."

Pope Francis had suggested the idea of a global fund using money diverted from spending on weaponry in his encyclical, "Fratelli Tutti, on Fraternity and Social Friendship." In the document, released in early October, he had written: "With the money spent on weapons and other military expenditures, let us establish a global fund that can finally put an end to hunger and favor development in the most impoverished countries, so that their citizens will not resort to violent or illusory solutions, or have to leave their countries in order to seek a more dignified life."

In his peace day message, the pope said the COVID-19 pandemic had aggravated "deeply interrelated crises like those of climate, food, the economy and migration" and caused "great suffering and hardship" for millions of people around the world.

Along with inspiring examples of selfless and generous assistance to others, especially on the part of health care and other "essential workers," Pope Francis said, the pandemic also brought "a surge in various forms of nationalism, racism and xenophobia, and wars and conflicts that bring only death and destruction in their wake."

Working for the common good with a special commitment to helping the poor is part of a "culture of care" that can bring peace, stability and greater prosperity to all, he wrote. And it is the only way "to combat the culture of indifference, waste and confrontation so prevalent in our time."

The Catholic Church's long history of defending human dignity and offering concrete assistance to individuals and communities, he said, led to the development of its social teaching, which elaborates a series of "principles, criteria and proposals that can serve as a 'grammar' of care: commitment to promoting the dignity of each human person, solidarity with the poor and vulnerable, the pursuit of the common good and concern for protection of creation."

"When the barque of humanity, tossed by the storm of the current crisis, struggles to advance toward a calmer and more serene horizon," he wrote, "the 'rudder' of human dignity and the 'compass' of fundamental social principles can enable us together to steer a sure course."

Those principles, the pope said, insist that each human being has rights and duties, that no person is discardable, that no one can thrive alone without harming others and that everyone has a claim on the goods needed to live a dignified life.

"Consequently, our plans and projects should always take into account their effects on the entire human family and consider their consequences for the present and for coming generations," he wrote.

Solidarity is a central aspect of a "culture of care," a consequence of recognizing the human dignity of others and is an essential component of building lasting peace, the pope said: "solidarity concretely expresses our love for others, not as a vague sentiment but as a 'firm and persevering determination to commit oneself to the common good, that is to say, to the good of all and of each individual, because we are all really responsible for all.'"

Echoing many of the themes presented in "Fratelli Tutti," Pope Francis said an attitude of solidarity sees other people not as obstacles or means to an end but "as our neighbors, companions on our journey, called like ourselves to partake of the banquet of life to which all are equally invited by God."

Presenting the pope's message during an online news conference, Cardinal Peter Turkson, prefect of the Dicastery for Promoting Integral Human Development, said, "To care is to know how to value, that is, to recognize the individual as a person with dignity that must be cared for" and whose access to the basic necessities is guaranteed "because the goods of creation are meant for all."

Christine Jeangey, an official at the dicastery, told reporters human dignity includes "the right of access to health care, which is as much a corollary of the right to life as the right to food and drinkable water; the right to work, decent working conditions and social security; the right to adequate housing; and the right to quality education, based on the recognition and appreciation of the dignity of each human person and the rights that flow from it, which is one of the pillars of democratic societies."