James Foley's mother offers thanks for 'so many prayers' 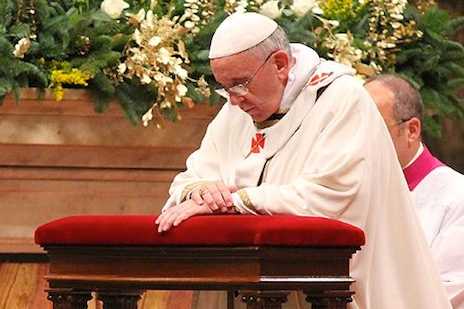 Pope Francis has called the family of U.S. journalist James Foley, who was beheaded by ISIS militants earlier this week, a Vatican spokesman has confirmed.

Fr. Federico Lombardi, director of the Holy See press office, confirmed to CNA in an Aug. 21 email that Pope called the Foley family about the death of James. On Aug. 19, the Islamic State (ISIS), a militant group that controls territory in Syria and Iraq, released a graphic video titled “A Message to America” which shows the beheading of Foley, who had gone missing in Syria in 2012. U.S. officials have now confirmed the authenticity of the video.

The insurgents said that Foley’s execution was in retaliation for U.S. airstrikes against Islamic State targets in Iraq. They warned that they have another missing American journalist, Steven Joel Sotloff, in captivity, saying that his life depends on U.S. President Barack Obama’s actions. Foley’s parents, John and Diane, had said Aug. 20 that the Pope was due to call them soon, according to The Daily Mail. They have voiced gratitude for the prayers offered for their son and the entire family. “We thank God for the gift of Jim. We are so, so proud of him,” said Diane. She added that they prayed to God for strength and were grateful that “God has given us so many prayers” throughout James’ captivity. “Jim would never want us to hate or be bitter. We’re praying for the strength to love like he did,” she said. “It's not difficult to find solace in this point in time,” John stated. “We know he is in God's hands, and we know he’s done God’s work.” “We need the courage and prayers now to continue without him.”