Pope calls Christians to be witnesses of peace

In his Easter message, the pontiff says a 'violent world' requires 'humble courage' 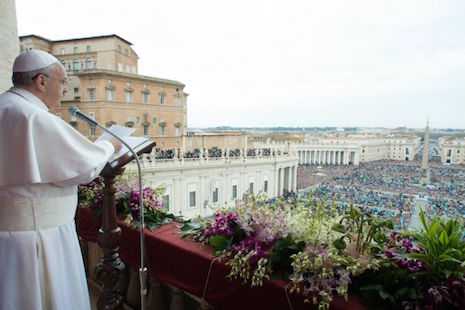 Pope Francis reminded Christians this Easter of the strength which comes from Christ’s death and resurrection, calling them to be witnesses of peace and justice, especially for those suffering today in regions of extreme violence and persecution.

“From the risen Lord we ask the grace not to succumb to the pride which fuels violence and war, but to have the humble courage of pardon and peace,” the pontiff said to tens of thousands of cold, rain-soaked pilgrims in St Peter’s Square for Easter Sunday Mass.

Delivering the traditional Urbi et Orbi address from the central balcony of the basilica after the Mass, the pope asked Jesus, as “the Victor over death, to lighten the sufferings of our many brothers and sisters who are persecuted for his name, and of all those who suffer injustice as a result of ongoing conflicts and violence”.

Pope Francis listed by name some of the current conflict zones around the world, especially the Middle East, Africa and Ukraine, and called for peace in those regions of ongoing violence.

He made particular mention of Kenya, which is still reeling from the massacre of 148 young people at Garissa University College on Thursday.

The pontiff also appealed for “peace and freedom” for victims of slavery, drug dealers and “peace for this world subjected to arms dealers.”

Looking down from the loggia of St Peter’s Basilica on the scores of pilgrims with their umbrellas, braving the inclement weather, the pope appealed for all those suffering: “the marginalized, the imprisoned, the poor and the migrants who are so often rejected, maltreated and discarded, the sick and the suffering, children, especially those who are victims of violence.”

He called on them to listen to Jesus’ consoling words:  “Fear not, for I am risen and I shall always be with you."

By the death and resurrection celebrated on Easter Sunday, Pope Francis said, “Jesus shows everyone the way to life and happiness: this way is humility, which involves humiliation. This is the path which leads to glory.”

“Christians, by the grace of Christ, dead and risen, are the seeds of another humanity, in which we seek to live in service to one another, not to be arrogant, but rather respectful and ready to help.”

This grace is a strength, not a weakness, the pope said. Rather, “those who bear within them God’s power, his love and his justice, do not need to employ violence; they speak and act with the power of truth, beauty and love.”

Original story:Pope's Easter message: In this violent world, what we need is Christ's resurrection