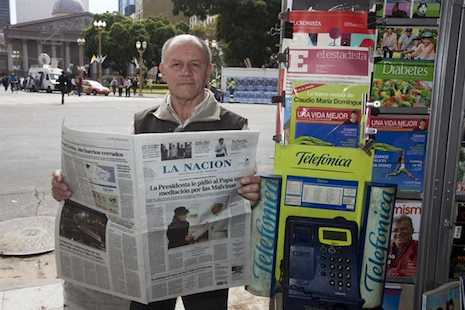 He's the leader of 1.2 billion Catholics around the globe, but Pope Francis isn't too busy or important to cancel his newspaper delivery.

The new pontiff — known as Cardinal Jorge Bergoglio until his election — shocked an Argentinian newspaper seller when he phoned earlier this week to say he wouldn't be needing the papers any more.

"Hi Daniel, it's Cardinal Jorge," he told Daniel Del Regno, according to the Catholic News Agency.

Del Regno, whose father owned the Buenos Aires newspaper kiosk, thought it was a joke.

"Seriously, it's Jorge Bergoglio," the pope continued. "I'm calling you from Rome."

Del Regno said once he realized one of the most influential men in the world really was calling to make sure no more papers were delivered to his apartment, he was "in shock."

"I broke down in tears and didn’t know what to say,” Del Regno told the Argentinean newspaper La Nacion. "He thanked me for delivering the paper all this time and sent best wishes to my family."

"I told him to take care and that I would miss him," Del Regno added. "I asked him if there would ever be the chance to see him here again. He said that for the time being that would be very difficult, but that he would always be with us."

His father, Luis Del Regno, said he delivered the papers six days a week but on Sundays, the cardinal would come by in person and chat before getting on a bus.

Once a month, he would even return the 30 rubber bands that were put around the papers to stop them from blowing away.

As archbishop of Buenos Aires, Bergoglio was famous of rejecting the trappings of his lofty position. Every parish priest had his home phone number and he set aside time for them to call each morning.

The younger Del Regno said that when Bergoglio left for the conclave last month, he asked about his chances of being elected pope.

"He answered me, 'That is too hot to touch. See you in 20 days, keep delivering the paper.' And the rest is, well, history," he said.