Francis should build on what he says in his book by demanding justice for those oppressed by China's brutal regime
Published: November 28, 2020 04:09 AM GMT ▾ This week Pope Francis finally broke his silence on one of the world’s worst atrocities of our time — the campaign of persecution against China’s Uyghurs. But he did so almost in passing and in a way that perhaps was intended to be noticed, but not too much.

Instead of expressing a prayer for the Uyghurs during the Sunday Angelus in St. Peter’s Square in Rome, as he has several times in response to the genocide of Myanmar’s Rohingya or the Yazidi in Iraq, he slipped it in briefly in a new book, Let Us Dream: The Path to a Better Future, written with the papal biographer Austen Ivereigh.

Speaking about the need to see the world from the peripheries, places “of sin and misery, of exclusion and suffering, of illness and solitude,” Pope Francis said: “I think often of persecuted peoples: the Rohingya, the poor Uyghurs, the Yazidi — what ISIS did to them was truly cruel — or Christians in Egypt and Pakistan killed by bombs that went off while they prayed in church.”

Many would say it was far too little, far too late at a time when most experts believe the human rights violations to which the Uyghurs are subjected reach the very highest levels of atrocity crimes — and a growing number say it is genocide.

For months Jewish leaders, including the late Lord Sacks, former chief rabbi of the Commonwealth, and Marie van der Zyl, president of the Board of Deputies of British Jews, have compared the plight of the Uyghurs to the Holocaust — an extremely rare comparison for Jews to make.

In August, 75 faith leaders, led by the former archbishop of Canterbury, Rowan Williams, and including two Asian cardinals, Cardinal Charles Bo from Myanmar and Indonesia’s Cardinal Ignatius Suharyo, as well as Muslim, Jewish, Buddhist and humanist representatives, called for international action. They argued: “The clear aim of the Chinese authorities is to eradicate the Uyghur identity. China’s state media has stated that the goal is to ‘break their lineage, break their roots, break their connections and break their origins’ … High-level Chinese government documents speak of ‘absolutely no mercy’. Parliamentarians, governments and jurists have a responsibility to investigate … We make a simple call for justice, to investigate these crimes, hold those responsible to account and establish a path towards the restoration of human dignity.”

Yet until now, Pope Francis has said nothing publicly. He has also remained silent on Hong Kong, Tibet, forced organ harvesting and the persecution of Christians in China despite the worst crackdown on religion since the Cultural Revolution. Indeed, despite highlighting issues of injustice around the world in one form or another almost every week, he has never mentioned China’s growing litany of human rights violations.

So why now, and why in this way?

The timing is clear. The Vatican’s strategy was to say nothing until its agreement with Beijing on the appointment of bishops, signed provisionally two years ago, was renewed. That took place last month despite no improvement in religious freedom in China in the past two years, no transparent review of the agreement’s benefits and continued secrecy about its details. Nevertheless, the first bishop to be appointed since the renewal of the agreement, Bishop Thomas Chen Tianhao of Qingdao, was ordained on Nov. 23. Perhaps the thinking in Rome was to get that out of the way and then the pope could say something.

A second reason for the timing is that criticism of Pope Francis on this issue was mounting in the rest of the world. As more religious leaders, human rights experts and governments spoke out and the clamor for action grew, Francis was increasingly conspicuous by his silence. Perhaps it was beginning to dawn on the Vatican that it was untenable for this to continue, that his moral authority was being undermined and that the silence had to be broken. For a pope known and loved for his closeness to the poor and oppressed to say nothing about one of the gravest human rights crises in the world was beginning to look absurd.

Presumably, however, the question for the Vatican then was how best to speak out in a way that would not infuriate Beijing. Slip it in as a passing reference in a book and hope Xi Jinping’s regime doesn’t notice, they may have thought.

This is where their naivety about the current regime in Beijing has come unstuck — and where China’s belligerent response may help wake Rome up to the fact that this is not a regime that can be appeased, let alone befriended and certainly not trusted. It is a regime that must be exposed, confronted and held to account.

Beijing’s response even to the mildest of references to the persecution of the Uyghurs by Pope Francis, buried in a 150-page book, was to furiously deny any wrongdoing at all. Chinese foreign ministry spokesman Zhao Lijian said in a press briefing that the pope’s remarks had “no factual basis at all” and claimed that “people of all ethnic groups enjoy the full rights of survival, development,p and freedom of religious belief.”

This is illustrative of the regime’s prickliness and mendacity. For a regime that increasingly wishes to pose as a superpower, it is remarkably thin-skinned. Every small criticism or expression of dissent at home, and increasingly abroad, is hunted down and not only rebuffed but threatened and where possible silenced.

I have been on the receiving end of this behavior myself, in several contexts. And I witnessed first-hand the Chinese regime’s attempts to shut down, influence, infiltrate and then intimidate an international Catholic gathering in Fatima last year, only because the organizers had the temerity to invite the father of Hong Kong's democracy movement, Martin Lee, and Hong Kong's emeritus bishop, Cardinal Joseph Zen. The Chinese embassy in Lisbon sent a large delegation to Fatima to find out what these pilgrims were up to.

The only way to deal with them is to ignore their tantrums, reject their lies and stand up for our values and beliefs. There is a danger that the appeasement types, the acolytes of Ostpolitik, in Rome will interpret Beijing’s reaction as confirmation that there is wisdom in staying quiet, and they may advise the pope not to rock the boat further. But that would be the worst possible response. If Beijing is allowed to think that the Vatican will quiver and retreat when Xi Jinping’s thugs say boo, the bullies will be emboldened. Indeed it is partly as a consequence of too many years of Western kowtowing that Beijing has become so much more aggressive abroad and repressive at home. Much of the rest of the world is finally waking up to that and changing course, and the Vatican should too.

The right reaction would be for the pope to build on what he says in the book, to be true to his word about seeing the world from the peripheries. It is time for him not only to “think” of the Uyghurs, as he says he does in the book, but to speak out for them, pray for them, demand justice for them. And to go further, by speaking out for Hong Kongers who are seeing their freedoms dismantled before their very eyes, for Christians in China whose churches are closed and torn down, crosses dynamited and clergy jailed, for Falun Gong practitioners whose organs are forcibly removed, and for Tibetans. Indeed it is high time that he — in keeping with all his recent predecessors as pontiff — met the Dalai Lama for the first time.

The Vatican needs to realize that it is dealing with a regime that lies and bullies by nature and that cannot be trusted to keep its word. It is a regime that has torn up a United Nations-registered international treaty with Britain, the Sino-British Joint Declaration, that was supposed to guarantee Hong Kong’s freedoms at least for the first 50 years from the handover in 1997.

None of this means that Rome should not talk to Beijing. Dialogue is certainly preferable to a stand-off that could have consequences for Catholics in China. But dialogue must be two-way. Dialogue should not result in silence or sell-out. The question is not "should we try to talk to Beijing?" but "what do we talk about and on whose terms?"

By revealing his thoughts, even if fairly obliquely, about the Uyghurs, Pope Francis has at least opened the door to shifting the balance, moving the Vatican’s engagement with Beijing onto a more principled footing, and restoring the trust of the many who love this pope and hate seeing his conscience compromised or his moral authority undermined. Let Pope Francis be emboldened to do more to stand with those on China’s peripheries.

Benedict Rogers is a human rights activist and writer. He is the co-founder and chief executive of Hong Kong Watch, senior analyst for East Asia at the international human rights organisation CSW, co-founder and deputy chair of the UK Conservative Party Human Rights Commission, a member of the advisory group of the Inter-Parliamentary Alliance on China (IPAC) and a member of the advisory group of the Stop Uyghur Genocide campaign. The views expressed in this article are those of the author and do not necessarily reflect the official editorial position of UCA News. 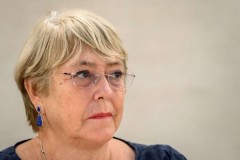