University of St. Joseph is one of four universities in the former Portuguese colony 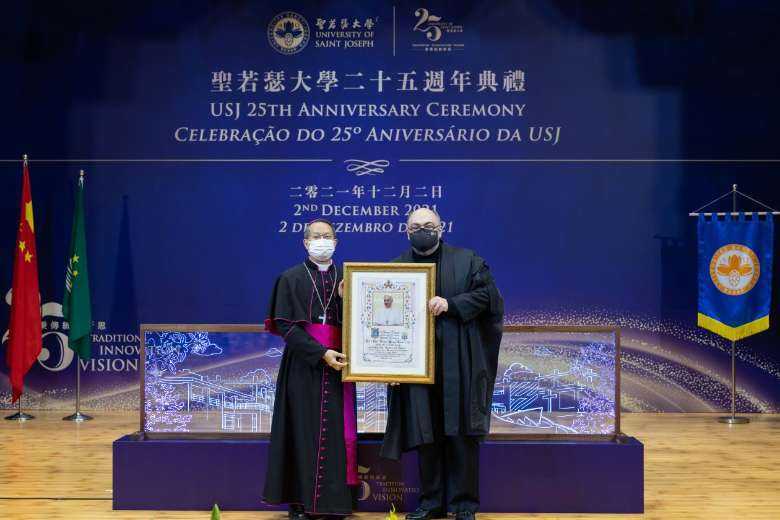 Bishop Stephen Lee Bun-sang of Macau delivers a decree from Pope Francis with blessings and appreciations for the University of St. Joseph in Macau on its 25th anniversary. (Photo: Jornal O-Clarim)

Pope Francis has sent his special blessings and appreciations to the sole Catholic university in Macau on its 25th anniversary.

Bishop Stephen Lee Bun-sang of Macau Diocese delivered the papal decree to Stephen Morgan, the rector of the University of St. Joseph (USJ), during the anniversary ceremony on Dec. 2, reports Jornal O-Clarim, the Portuguese-language Catholic weekly of Macau.

While delivering the papal decree with blessings and appreciations, Bishop Lee said he hopes USJ will continue to maintain its international reputation in academic excellence in the short and long term.

“I think the most important thing is for the university to be able to maintain its mission as a platform open to all nationalities, all races and all faiths so that students can get to know China and Chinese culture," said the prelate, who has been chancellor of the university since 2017.

He expressed hope that the university becomes "a platform where Chinese and Western culture can meet, can understand each other and learn from each other."

In the past 25 years, the University of St. Joseph has managed to assert itself as a university for Macau and at the service of Macau

The 40-minute jubilee ceremony featured an installation of a statue of Chinese philosopher Confucius as well as murals of other local personalities who contributed to the growth of USJ over the past 25 years.

“In the past 25 years, the University of St. Joseph has managed to assert itself as a university for Macau and at the service of Macau,” she said.

She also thanked USJ for training people with quality education.

Founded in 1996, USJ operates under the Diocese of Macau and is affiliated to the Catholic University of Portugal. It is one of four universities in Macau but until September it was barred from accepting students from mainland China.

Thanks to years of academic excellence and collaboration with leading universities in the mainland, USJ received permission from the central government to enroll students from the mainland for the first time in its 25-year history.

It can recruit students from the mainland for postgraduate programs in architecture, business administration, information systems and science starting from the current academic year.

Macau, a gambling and gaming hub, was under Portuguese rule from 1557 to 1999

Morgan insisted that the university's mission has remained the same since its foundation.

“Our goals remain the same — to continue to grow steadily in order to ensure a high-quality international experience for our students in a Catholic atmosphere,” Morgan said.

“With regard to students on the continent, we hope to be able to demonstrate as much as possible to the Chinese authorities that the University of St. Joseph is guided by witness and service, and is committed to something that motivates us all: peace and harmony, wisdom and education.”

Macau, a gambling and gaming hub, was under Portuguese rule from 1557 to 1999. It is now an autonomous territory of China with an estimated population of about 700,000.

Catholicism in Macau bears the legacy of the Portuguese era. About 30,000 Catholics live in nine parishes of Macau Diocese.