St Joseph is now to be included in prayers 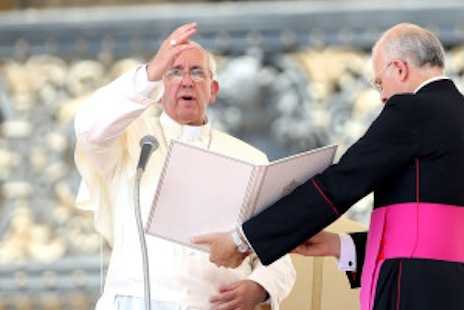 Pope Francis approved a change in the Catholic Mass to include prayers referencing St. Joseph, the Vatican announced Wednesday.

The additions, which in English amount to five words inserted after the Eucharistic prayer, were issued by the Vatican’s Congregation for Divine Worship and the Discipline of the Sacraments. The new words, "with blessed Joseph, her spouse," follow a mention of Mary and are included in three different versions of the prayer.

The change, in the works under former Pope Benedict XVI before his retirement, reflect the church's growing interest in "fatherly care," said the Rev. Dan Merz, associate director of the Secretariat of Divine Worship for the United States Conference of Catholic Bishops.

"It's emphasizing that St. Joseph was someone who protected the Blessed Virgin and who cared for Jesus. We call him the foster father of Jesus, but we have to think of that word in the sense that he fostered the humanity of Jesus," said Merz. "He nurtured and helped Christ grow into an adult."

Merz said priests can immediately start using the new prayer, which is said near the end of Mass before the Lord's Prayer and communion. In addition to English and Latin, the Vatican released text for the new prayers in Spanish, Italian, Portuguese, French, German and Polish.