“The Holy Father has accepted the resignation from the pastoral care of the metropolitan archdiocese of Seoul, Korea, presented by His Eminence Cardinal Andrew Yeom Soo-jung, and has appointed as metropolitan archbishop of Seoul Bishop Peter Chung Soon-taek, O.C.D., titular of Tamazuca and auxiliary of the same metropolitan see,” read a bulletin from the Vatican press office on Oct. 28.

Archbishop-elect Chung, 60, succeeds Cardinal Yeom, 77, who has led the archdiocese since 2012 and expressed his intention to step down after reaching the mandatory retirement age of 75. Pope Francis extended his term for two years.

Since Feb. 14, 2014, Bishop Chung has served as the auxiliary bishop of Seoul. He is the first native archbishop of Seoul from a religious order as all previous archbishops were diocesan clergy, according to Catholic Times of Korea.

Cardinal Yeom greeted Archbishop Chung following the appointment and approved a special prayer for the new shepherd of the archdiocese.

A thanksgiving Mass for Cardinal Yeom will be celebrated at Myeongdong Cathedral in Seoul on Nov. 30 and Archbishop Chung’s installation Mass is scheduled for Dec. 8.

My mind is filled with apprehension. With the help of prayers, I will try to follow in the footsteps of great predecessors and cure souls the best I can

The new archbishop has sought prayers from the faithful as he prepares to take up his new responsibilities.

"Jesus is beyond the reach of humans. We can't possibly speculate on his planning or thinking," Archbishop-elect Chung said.

"My mind is filled with apprehension. With the help of prayers, I will try to follow in the footsteps of great predecessors and cure souls the best I can." 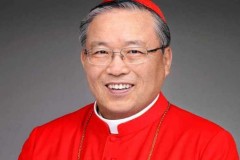 He studied sacred scriptures at the Pontifical Biblical Institute in Rome from 1999 to 2004 and obtained a master’s degree.

He became provincial definitor of the Discalced Carmelites of Korea in 2005 for three years. In 2009, he became the definitor general in Rome for the Far East and Oceania.

In Seoul Archdiocese, Bishop Chung was deputy director of its youth ministry and has served as chairman of the Korean Church History Research Institute since 2016.

Seoul Archdiocese is the largest among three archdioceses, 14 dioceses and a military ordinariate in South Korea. It has an estimated 1.5 million Catholics in 229 parishes while the country's Catholic population is about 5.6 million.

Official government records show that about 56 percent of an estimated 58 million South Koreans have no religion, 20 percent are Protestant, 8 percent are Catholic and 15.5 percent are Buddhist.