'None of us can fail to be aware of the gravity of the situation, the immense toll of human suffering involved' 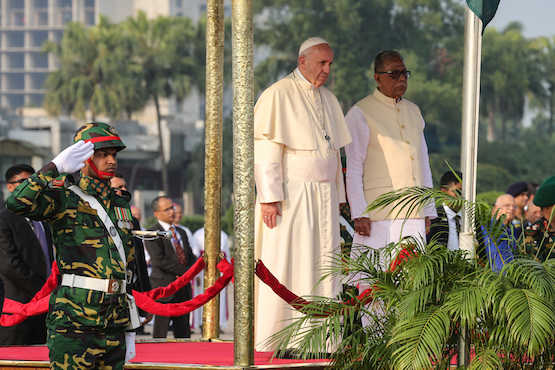 Pope Francis with Bangladesh President Abdul Hamid upon his arrival in Dhaka on Nov. 30. (Photo by Joe Torres/ucanews.com)

Pope Francis has called on the international community to take "decisive measures" to resolve the causes of what he described as a "grave crisis" that resulted in the massive influx of refugees from Myanmar.

In a speech upon his arrival in Bangladesh on Nov. 30, the pontiff did not mince words when he said that it is "imperative" to resolve the political issues that caused the "mass displacement of people."

Although the church leader did not use the word Rohingya to describe the "refugees from Rakhine State," he was clear in demanding for "immediate material assistance" to respond to the crisis.

The pope, who is on the second leg of his Asian tour after leaving Myanmar, expressed his gratitude to Bangladesh for the "spirit of generosity and solidarity" by providing shelter to the refugees.

"This has been done at no little sacrifice. It has also been done before the eyes of the whole world," said Pope Francis in a speech before government leaders.

"None of us can fail to be aware of the gravity of the situation, the immense toll of human suffering involved, and the precarious living conditions of so many of our brothers and sisters," he said.

More than 600,000 Rohingya people have sought shelter in camps in Bangladesh following attacks by Myanmar’s security forces, including the burning of entire villages, in recent months.

Several groups have criticized Pope Francis for refusing to use the word Rohingya to refer to the displaced people from Myanmar.

Nur Khan, former executive director of the Law and Arbitration Center, a human rights group in Dhaka, said he is "frustrated" by the pontiff’s refusal to use the word.

"He has mentioned refugees from Rakhine State of Myanmar who fled to Bangladesh, which does not directly mean Rohingya," said Khan, a Muslim.

He said he considers Pope Francis "a great spiritual leader who vehemently promotes justice, human rights and peace, and he is capable of influencing global politics."

"The world listens to Pope Francis, so our expectation from him is always high," said Khan, adding that "the world will not turn upside down" if the pope mentions Rohingya.

But Father Tapan Camillus De Rozario, chairman of the World Religion and Culture department at the University of Dhaka, said "it does not matter" whether the pontiff mentions Rohingya.

He said people in Bangladesh should not forget that the pope has his limitations "and he cannot solve all the problems."

The priest said people should not "force upon the pope our own words or demands."

"Even if the pope didn’t mention the word, [Catholic church leaders in Bangladesh] have been constantly using the term," said the priest.

"Pope Francis will always stand beside oppressed people, so do will the Catholic church," he added.

Vatican spokesman Greg Burke said the fact that Pope Francis has visited Myanmar and Bangladesh "is an incredibly positive thing."

Need for dialogue and work for peace

Although the pope is not visiting a refugee camp during his trip, a group of Rohingya refugees is scheduled to attend a meeting of religious leaders with the pontiff in Dhaka on Dec. 1.

He said he will be praying with the religious leaders for peace "and reaffirm our commitment to work for peace" as he lauded Bangladesh’s "atmosphere of mutual respect."

The Catholic Church leader praised the "growing climate of interreligious dialogue" in Bangladesh that allows people "to express freely their deepest convictions."

"In a world where religion is often — scandalously — misused to foment division, such a witness to its reconciling and unifying power is all the more necessary," he said.

The pontiff later in the day paid tribute to the father of the nation Bangabandhu Sheikh Mujibur Rahman, whom the church leader lauded for his ideology and vision.

"He envisioned a modern, pluralistic and inclusive society in which every person and community could live in freedom, peace and security," said Pope Francis.

He said the late leader had better understanding of the need of global unity, adding that in today's world, "no single community, nation or state can survive and make progress in isolation."

"For only through sincere dialogue and respect for legitimate diversity can a people reconcile divisions, overcome unilateral perspectives, and recognize the validity of differing viewpoints," he added.

Pope Francis said he is visiting Bangladesh "to pray with my Catholic brothers and sisters, and to offer them a message of affection and encouragement."

He noted that Catholics in Bangladesh have sought to play a "constructive role" in the development of the country through their schools, clinics, and dispensaries.

"I am confident that, in accordance with the letter and the spirit of the national Constitution, the Catholic community will continue to enjoy the freedom to carry out these good works as an expression of its commitment to the common good," said the pontiff.

Pope Francis arrived in Dhaka past 3 p.m. and was welcomed by Bangladesh President Abdul Hamid, eight local bishops, and a number of government leaders.