Pope Francis has accepted the resignation of Cardinal Robert Sarah as prefect of the Congregation for Divine Worship and the Discipline of the Sacraments without naming a successor.

Cardinal Sarah turned 75, the canonical age of retirement, in June 2020. The most senior African prelate at the Vatican has headed the liturgy department since November 2014.

The conservative Guinean cardinal’s public statements on the liturgy reflected a pre-Vatican II outlook in contrast with Pope Francis, who is implementing the teachings of the Second Vatican Council.

After the Vatican accepted his resignation on Feb. 20, Cardinal Sarah tweeted in French: “Today, the pope has accepted my resignation as prefect of the Congregation for Divine Worship, after my 75th anniversary [of birth]. I remain in the hands of God. The only rock is Christ. We will meet again very soon in Rome and other places.”

While heading the Congregation for Divine Worship and the Discipline of the Sacraments, the cardinal was known for his outspoken commentary on the Church and the world.

In 2016, he asked priests to celebrate Mass facing east, forcing the Vatican to issue a clarification.

During the first Synod on the Family in 2014, the cardinal said the media was taking an extra interest “to push the Church [to change] her doctrine” on homosexual unions.

At the 2015 family synod, his statement on homosexuality and abortion became controversial as he said, “… what Nazi fascism and communism were in the 20th century, Western homosexual and abortion ideologies and Islamic fanaticism are today.”

In January 2020 he caused embarrassment to Pope Emeritus Benedict XVI by presenting him as co-author of the book From the Depths of Our Hearts.

The book has a chapter credited to the pope emeritus, another credited to Cardinal Sarah, and an introduction and conclusion, which are attributed to them jointly. 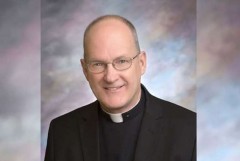 The pope emeritus later distanced himself from the book and asked for his name to be taken off as co-author. Cardinal Sarah defended himself, saying in Jan. 17, 2020, that he met Benedict and “there is no misunderstanding between us.”

Cardinal Sarah was a candidate for the papacy in the 2013 conclave which chose Pope Francis.

He was born in French Guinea in 1945 and was ordained a priest in 1969 for the Diocese of Conakry.

In 2001, Pope John Paul II named him secretary of the Congregation for the Evangelization of Peoples.

He became president of the Pontifical Council Cor Unum in October 2010 — one month after he was elevated to cardinal.