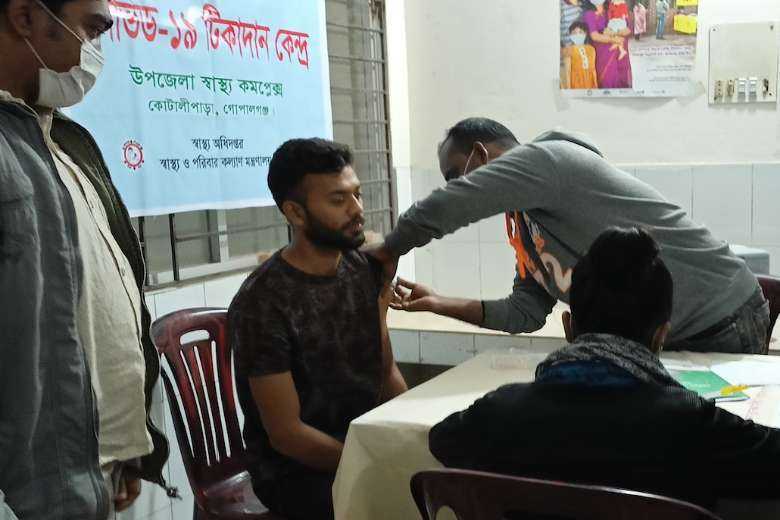 Bangladesh’s government has launched a nationwide mass Covid-19 vaccination program amid an apparent lack of enthusiasm from people to get registered for the jabs.

A total of 31,160 people who registered got first shots of the vaccine on the first day of the vaccination drive on Feb. 7, according to Health Ministry data.

However, health officials said the government was ready to vaccinate 360,000 people on the first day and was aiming for 3.5 million people to get a two-dose vaccine in the first phase of the drive.

The government has developed a website for vaccination registration.

Church officials blamed a lack of awareness, misinformation and poor publicity for low registration for vaccination.

On social media there were postings about alleged side effects of the vaccine and difficult access to registration and vaccination points, said Father Bablu Lawrence Sarker, secretary of the Health Care Commission of Khulna Diocese in southern Bangladesh.

The priest noted that no prominent Christian was seen or known to be vaccinated on the first day, but he is determined to get vaccinated soon.

“Whether I live or die, I will be vaccinated. But there is a reluctance among people because there has been some propaganda that has had a negative impact on them. There is a lack of publicity. Since it is a personal matter, there will be no instructions from the Church about vaccination” Father Sarker told UCA News.

The priest noted that since people saw some prominent citizens including politicians and government officials getting vaccinated, they will be encouraged to follow suit.

“It is important to maintain discipline so that people don’t face any troubles when they get vaccines,” he added.

“Mass public awareness and publicity were missing that could attract more people for vaccination. There were no billboards, no effective public relations,” he told UCA News.

Rozario, who recovered from Covid-19 after a weeks-long battle last year, said he had been trying to register for vaccination but failed due to technical problems.

“The registration app didn’t accept my application after several attempts. I think frontline warriors and seniors should be allowed to get vaccines first. Also, religious leaders should register for it, which will encourage many to get vaccinated,” he added.

The mass inoculation drive follows a pilot vaccination program inaugurated by Prime Minister Sheikh Hasina on Jan. 27. Runu Veronica Costa, 39, a Catholic and senior staff nurse at state-run Kurmitola General Hospital in capital Dhaka, received the first shot of the vaccine followed by government officials and others on the day.

Bangladesh is using the Covishield vaccine developed jointly by the University of Oxford and British-Swedish pharmaceutical giant AstraZeneca. The vaccine has been imported from the Serum Institute of India.

The government has purchased five million doses and received another two million from India’s government as a gift.

Bangladesh, a South Asian nation of more than 160 million, has recorded about 538,000 cases and 8,205 deaths from Covid-19, according to government data.