Residents of slums, prisoners and construction workers face the greatest risk of contracting the contagion Inmates who tested positive for Covid-19 are quarantined in a field hospital in Bangkok on May 9 as Thailand continues to battle its latest surge in infections, partly due to outbreaks in prisons. (Photo: AFP)

Thailand’s Covid-19 outbreak has been primarily impacting underprivileged and vulnerable people, including residents of slums, prisoners and construction workers, based on official figures.

The Southeast Asian nation recorded 9,635 new infections on May 17, of which 6,853 were detected at 12 prisons around the country.

At just one facility, Chiang Mai Central Prison in northern Thailand, as many as 3,929 inmates tested positive, according to officials.

The mass testing on inmates around the country was undertaken after it was revealed last week that thousands of inmates had contracted the virus at two prisons in Bangkok, including one facility for female inmates.

Thai prisons are notorious for their unsanitary conditions with chronic overcrowding. Dozens of inmates are kept in small cells where there is no space even for proper beds, so prisoners take turns sleeping on the floor while lying side by side.

At the same time, nearly 500 people at a large construction worker camp in a district of Bangkok tested positive for the virus. Of the 559 workers living in the camp, 482 were found to have been infected, accounting for 86 percent of all residents.

I’m afraid. Many people in my area have the disease

In recent weeks several clusters of Covid-19 have also been detected in overcrowded shantytowns around Bangkok, with random tests showing that up to 10 percent of residents have come down with the potentially fatal virus.

There are growing concerns that infection rates could soon spiral out of control in close-knit, low-income communities where locals are ill equipped to observe social distancing rules.

“I’m afraid. Many people in my area have the disease,” Supansa Boondee, a woman who lives in an inner-city slum and makes a living selling home-cooked food on the street, told UCA News.

Nearly two dozen people tested positive for Covid-19 in her immediate vicinity on May 17. 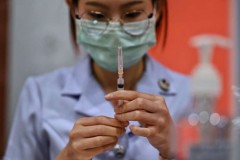 “I always wear a mask and wash my hands,” said Supansa, who lives with five other people in a small cinderblock abode. “Apart from that, what can I do?”

Complicating municipal disease-mitigation measures is that many residents of shantytowns with high infection rates work around town as delivery men, security guards and maids, among other occupations. This has raised fears that the virus could be spread far and wide from these communities.

Thailand, once touted as a success story in containing the virus, has had more than 100,000 documented cases of Covid-19, the vast majority of them in the past few weeks.

Citizens have increasingly been pointing an accusatory finger at the administration of Prayut Chan-o-cha for the latest outbreak.

Despite ample time to prepare for a mass outbreak throughout last year when Thailand had a very low rate of infections, Prayut’s government has failed to procure enough doses for a mass vaccination.

To date, only around 2 percent of the country’s 69 million citizens have been vaccinated.

Starting next month, tens of thousands of Thais will be vaccinated daily, but at the forecast rate it will take many months before any level of herd immunity is achieved.

In the meantime, millions of Thais will continue to languish without incomes after losing their jobs in a severe economic downturn, which has seen the country’s tourism-dependent economy suffer dramatic losses.

Low-income earners in urban shantytowns have especially been affected.

“Many people [in my community] have no money left. They are desperate. I am also suffering because my business is very bad. I don’t know how much longer we can go on like this,” Supansa said.