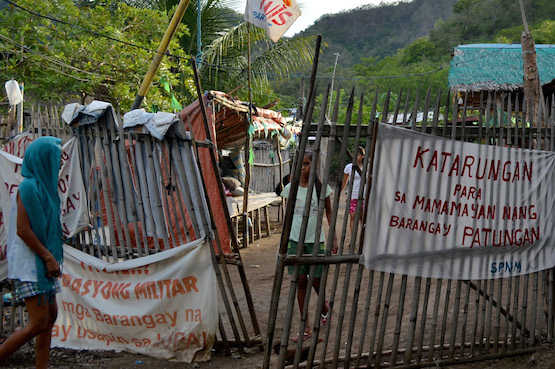 Villagers set up barricades to prevent outsiders from entering after state officials descended on the village of Patungan to arrest community leaders. (Photo by Jen Guste)

With Philippine President Rodrigo Duterte finally sworn into office, families and friends of political prisoners are looking forward to the day when they will be reunited with their loved ones.

"My father told me to vote for [Duterte] because he promised to release political prisoners, that's why all of us voted for him," says 20-year-old Wilmalyn Castillano.

Wilmalyn was 17-years-old when the military arrested her father, farmer William Castillano, 61, on Feb. 21, 2014. Also arrested was 60-year-old fisherman Lorenzo Obrado from Maragondon in Cavite province.

Neighbors say police and soldiers swooped into the village of Patungan on that day to arrest leaders of a village group opposing a big land developer in the area.

Susana Agner, secretary-general of the fishermen and farmers group "Save Patungan Now," says the arrest of Castillano and Obrado was a "desperate move" by real estate developers wanting to enter "our small paradise."

The village of Patungan is nestled in one of several coves lining the shores of Maragondon town.

To the South East is Pico de Loro National Park, a place often packed with tourists.

Nearby stand many resorts owned by real estate developers. Opposition by farmers and fishermen, who set up "Save Patungan Now" to assert their right to land, prevented the expansion of these resorts.

One big corporation, however, filed charges against the villagers, that included malicious mischief unlawful detention and trespassing, in an effort to claim their land.

The villagers claim the charges were designed to pressure the people to give in to the wishes of big business. Fishermen return to the village of Patungan from an overnight fishing trip. (Photo by Jen Guste)

Going to prison for land

Wilmalyn's father was one of the beneficiaries of a government agrarian reform program to hand land to poor farmers.

However, when the land developer claimed the village as part of a future development project, William became very vocal in his opposition.

When a highway was built near the community in 2013, farmers stepped up their opposition. They claimed they were no longer able to move freely around their village.

The corporation, by now backed by the authorities, then deployed armed security guards and police checkpoints were set up, supposedly to prevent agitators from entering the village.

Materials for people's houses and fishing boats were also barred from coming in, and the ability of farmers to farm their land was severely restricted.

Gone also were the days when the farmers were able to harvest up to 40 sacks of rice per crop from their fields.

"There used to be plenty of food on the table. People, especially the children, were happy," says farmer Basilio Agner.

It was the subsequent opposition to what they said was the developer's attempted theft of their land that got William Castillano and Lorenzo Obrado arrested and thrown in jail.

They said the developer was taking land that was supposed to be reserved for the poor in the agrarian reform program.

"There used to be about 600 households in the village, now there are just about 300," Basilio says.

He says villagers were paid about US$120 each to agree to be transferred to a relocation site provided by the land developer. The new site, however, is far from the sea and people's farms.

In February this year, authorities ordered the villagers to vacate the land. On May 31, the police issued a "notice of demolition." The residents were given until July 7 to leave. Children play in the village of Patungan where villages live under the threat of displacement. (Photo by Jen Guste)

However, the villagers hope that the new administration of President Duterte, who promised change for the people and amnesty to political prisoners, will save them.

"We only want our lives back, living simply, harvesting our crops together as a family," says Wilmalyn.

The community is looking forward to the implementation of genuine agrarian reform, she says, so that the dream of her parents and their neighbors to cultivate their own land freely will be realized.

"We remain vigilant and steadfast in our struggle to assert our rights to land and decent living," says Susan.

Diego Torres of the activist New Patriotic Alliance in the Southern Tagalog region says the people are "hopeful the new administration will implement immediate action" and give those still waiting for the land they were promised and protect those who have received land from losing it to big business.

"We trust and believe Duterte and the new administration will stand firm and act on their pro-people stance," says Torres, adding that Filipinos "have long been oppressed and are still suffering because of anti-people policies carried out by past administrations."