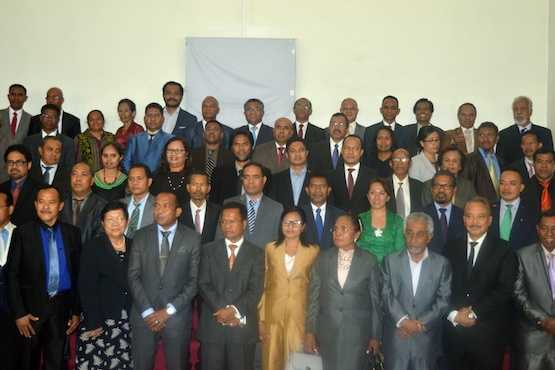 Newly elected members of Timor-Leste parliament after at the parliament building in Dili. (Thomas Ora)

After six weeks of negotiation, an alliance lead by former revolutionary party Fretilin will lead the economically troubled Catholic nation of Timor-Leste for the next five years.

The news comes only a week after the energy rich country finally struck a deal with neighboring Australia over the vast quantities of oil and gas that lies beneath waters that have been disputed.

The country's July 21 election threw up no clear winner and required multilayered discussion after Fretilin's coalition partner, the CNRT (National Congress for Timorese Reconstruction) headed by former President and Prime Minister Xanana Gusmao, opted to split from the alliance.

Members of parliament were sworn in on Sept. 5, after a coalition was confirmed between Fretilin, Democratic Party and Khunto alliance garnered 35 of the 65 seats in the parliament to form a majority required to ensure a stable government.

Meanwhile, the Popular Liberation Party (PLP) and CNRT will stand as opposition, the first time in the country's history where there will be a significant number of MPs on the opposition benches.

Aniceto Longuinho Guterres Lopes from Fretilin was elected president of the parliament, wining 33 votes against Aderito Hugo da Costa who is supported by CNRT and PLP.

In his first speech following his victory Lopes asked all parties to leave behind their differences and work together for a better society.

"Parliament is ready to work with the Catholic Church and other religions, and all elements in society," Lopes said.

In Timor-Leste over 80 percent of its 1.3 million people are Catholic.

"We have to collaborate in dealing with economic issues, health, education, unemployment, and poverty," said Lopes, a former human rights lawyer and recipient of the 2003 Ramon Magsaysay Award, sometimes called the Asian Nobel Peace Prize.

Lopes, who has been in parliament for 15 years, called on members of the five political parties to improve their work ethos and to travel to the country's remotest areas to identify and understand the real problems Timor-Leste's largely impoverished people face.

Armanda Berta dos Santos, chairman of Khunto, said that his party will never trivialize peoples votes and will support the government in its efforts to address fundamental concerns, such as health, education, road infrastructure and clean water.

"Khunto will work hard for the people," he said.

Meanwhile, Fidelis Manuel Leite Magalhaes, deputy chairman of PLP, said his party chose to be opponents in the new parliament to ensure that the next government will really work for peoples welfare, not party interests.

Pelagio Doutel, a researcher at La'o Hamutuk, a Dili-based organization that monitors government policies, said the new MPs should ensure that the government creates breakthroughs.

Since 2005, Timor-Leste has been too dependent on oil as the source of revenues.

In fact, some major oil fields such as the Kitan which has stopped production and Bayu Undan which will dry up by in next four years, are depleted.

"The future of Timor-Leste is not stable if we only depend on oil, because oil price fluctuates," Doutel told ucanews.com on Sept. 6.

He also said that the remaining US$16 billion balance in the petroleum fund that effectively finances the nation will only be sufficient for the next few years. Every year, more than US $1 billion is taken from the petroleum fund to finance government projects.

Xanana Gusmao lead the negotiation team in Copenhagen where a new agreement between Timor-Leste and Australia was made.

Details remain confidential until an expected announcement in October but is viewed as a significant victory for Timor-Leste.

The agreement covered the main issues surrounding a long-running dispute over gas and oil fields in the Timor Sea, including the legal status of the US$50 billion Greater Sunrise gas field.

"This is an historic agreement and marks the beginning of a new era in Timor-Leste's friendship with Australia," Xanana said, although the final decision will have to be made in October.

In the next few days the governing alliance will propose candidates for the post of prime minister. Two former prime ministers — Mari Alkatiri, Fretilin's secretary general or incumbent Rui Maria de Araujo are expected to take the post.