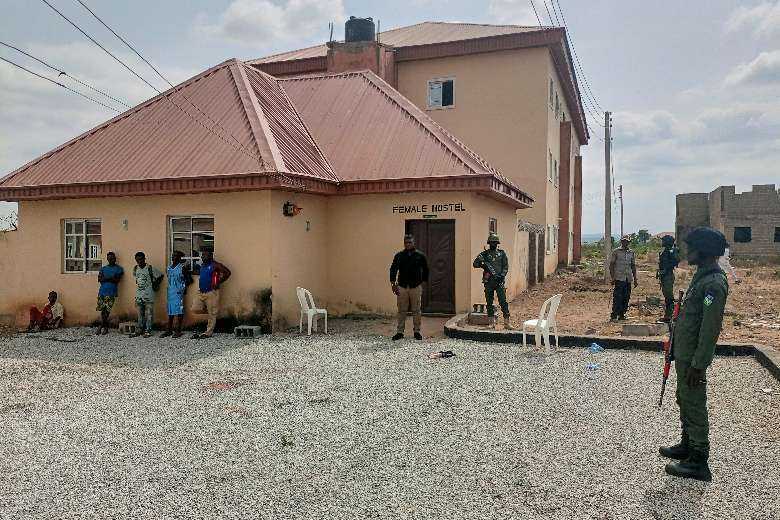 Security personnel stand at a female hostel at the Greenfield University in Kaduna, Nigeria, on April 21. (Photo: AFP)

The pontifical charity Aid to the Church in Need hopes to raise $51,000 to erect a security wall around the major seminary of the Good Shepherd in Nigeria's Sokoto Diocese.

Four philosophy students, among them Michael Nnadi, were kidnapped by people in military uniforms in January 2020. One of the seminarians was freed with serious injuries 10 days after the Jan. 8 attack, and two others were released Feb. 1, but Nnadi was found dead.

In late April of that year, Nigerian police arrested three men, part of a 19-man gang that had been working along the 110-mile stretch of road between Kaduna and Abuja, Nigeria's capital.

Aid to the Church in Need said it hoped to "instill a sense of safety among the seminarians at the institution who are said to be living in fear following the abduction incident."

"Ever since then, there has been an atmosphere of insecurity among the seminarians, and many are afraid, the charity said.

Currently, the seminary is surrounded by a fence.

At a February memorial Mass at Holy Family Cathedral in Sokoto, Bishop Matthew Hassan Kukah said: "It is quite tragic that (after) one year, we are still closer to nowhere we hope to be. The harvest of death has gotten richer, more and more people are dying.

"Things have gotten progressively worse as far as the lives of our ordinary people are concerned," he said. "It is a matter of great concern and great sadness that we haven't come anywhere close to securing our people and securing our country."

In his Easter homily, Bishop Kukah criticized the Nigerian government for investing millions of dollars in rehabilitating so-called repentant terrorists in the belief that they would turn over a new leaf. He said the public had not heard anything about a rehabilitation program for the thousands of Nigerian schoolchildren who had been victims of abduction.